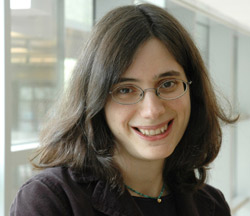 We first apply this approach to decipher the network that controls the transcriptional response to pathogens in primary dendritic cells (DCs), testing the regulatory function of over a hundred transcription factors, chromatin modifiers, and RNA binding proteins. Our approach accurately assigned dozens of known regulators (e.g. NFkB, IRFs, and STATs) to their target genes and discovered dozens additional functional regulators that were not previously implicated in this response, quantifies their contribution of each regulator to two major transcriptional programs. We identify a core network of key regulators and fine-tuners, which uses a combination of coherent feed-forward circuits, dominant activation, and cross-inhibition to control response specificity. Among these we discover a tier of chromatin modifiers that specifically repress interferon beta 1 (IFNB1) expression upon bacterial but not viral stimulation, and a large circuit of cell cycle regulators that was co-opted to regulate the viral response. We then show how a similar strategy can be used to study the global architecture of gene regulation across ~40 cell populations in human hematopoiesis, from hematopoietic stem cells, through multiple progenitor and intermediate maturation states, to terminally differentiated cell type, implicating dozens of new regulators in hematopoiesis and demonstrate a substantial re-use of gene modules and their regulatory programs in distinct lineages.

Our work establishes a broadly-applicable, comprehensive and unbiased approach to identifying the wiring and function of a regulatory network controlling a major transcriptional response in primary mammalian cells.

Computational biologist Aviv Regev’s joined the Broad Institute as a core faculty member in 2006. Her research centers on understanding how complex molecular networks function and evolve in the face of genetic and environmental changes. In addition to her position at the Broad Institute, Aviv is an assistant professor in the department of biology at MIT and an Early Career Scientist at Howard Hughes Medical Institute. In 2008, she received the Overton Prize from the International Society for Computational Biology and the NIH Director’s Pioneer Award. She is a past recipient of the Burroughs Wellcome Fund Career Award.