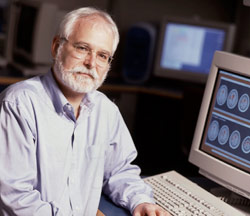 Dr. Donoghue will discuss progress being made to develop devices that can restore lost functions of the nervous system following disease or injury. In particular, he will discuss the development of the BrainGate neural interface system, a form of brain computer interface (BCI) that is designed to restore independence and control for people with paralysis. BrainGate uses a tiny sensor implanted in the brain that detects motor intentions that are converted to movement command signals using signal processors outside the body. BrainGate, now in a pilot human clinical trial, has been tested in five people who have longstanding, severe paralysis. It will be shown how people have been able to use their own brain signals to directly control a range of devices, such as computers and robotic arms. Dr. Donoghue will explain how it is possible to detect and decode motor signals from the brain and discuss the future implications of technology that can read out or write into brain circuitry. Finally, he will also discuss what we are learning by being able to study human brain activity at a resolution and form never before available.

Neuronal ensemble control of prosthetic devices by a human with tetraplegia.

John Donoghue is the head of the Donoghue Lab at Brown University. The lab investigates how the brain turns thought into voluntary behaviors and how that knowledge can be used to help persons with paralysis. Donoghue and his colleagues study how populations of neurons represent and transform information as a motor plan becomes movement. This approach has required the creation of a novel recording array to study neural ensembles. With the knowledge they have gained about movement representation, have translated their findings to a clinical application in which humans with paralysis can use their neurons directly to control devices.

Dr. Donoghue is Henry Merritt Wriston Professor in the Department of Neuroscience at Brown University, Director of the Brown Institute for Brain Science, VA Senior Career Research Scientist, and Director of the Center of Excellence for Neurorestoration and Neurotechnology, Rehabilitation R&D Service, Department of Veterans Affairs Medical Center, Providence, RI. From 1991 to 2006, Dr. Donoghue was the founding Chairman of the Department of Neuroscience at Brown. For more than 20 years, Dr. Donoghue has conducted research on brain computer interfaces and his laboratory is internationally recognized as a leader in this field. Dr. Donoghue has published over 80 scientific articles in leading journals such as Nature and Science, and has served on advisory panels for the National Institutes of Health, the National Science Foundation and NASA. Dr. Donoghue has won awards for his work from Discover, Popular Mechanics, and Reader’s Digest magazines. In 2007, he won the K. J. Zulch Prize, Germany’s highest honor for neurological research. Dr. Donoghue is a fellow in the American Institute for Medical and Biomedical Engineering and the American Association for the Advancement of Science as well as a member of the board of directors for the MIT Media Lab. Dr. Donoghue received an A.B. from Boston University in 1971, an M.S. in anatomy from the University of Vermont in 1976, and a Ph.D. in neuroscience from Brown University in 1979.