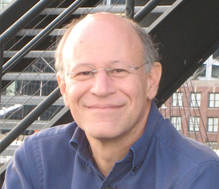 My talk is based on mathematical and computational studies of neural network models. Understanding the range of dynamic phenomena in such models provides a basis for thinking about the more complex dynamics of real neural circuits. Neuroscientists typically look for neural responses that have a direct relationship to a task being performed. I will discuss how populations of neurons can generate useful responses even when the activity of individual neurons (the ugly ones) cannot be interpreted in a straightforward manner. This provides a basis for modeling adaptive behaviors as arising from relationships between apparently random patterns of neural activity.

Larry Abbott’s research involves the computational modeling and mathematical analysis of neurons and neural networks. Analytic techniques and computer simulation are used to study how single neurons respond to their many synaptic inputs, how neurons interact to produce functioning neural circuits, and how large populations of neurons represent, store, and process information. Areas of particular interest include spike-timing dependent forms of synaptic plasticity; transformations of sensory encoding in olfaction, and the dynamics of internally generated activity and signal propagation in large neural networks.

Most neural activity is generated internally but nervous systems are nevertheless highly sensitive to external influences such as sensory stimuli.  We study how stimulus driven and internally generative activity interact and combine to produce responses.  We also model how chaotic ongoing activity can be harnessed and controlled to produce useful motor output.  We are interested in representing perception not as a passive analysis of sensory input, but as a dynamic process that involves modeling the external world, making inferences about predictable events and noting when something unexpected happens.  This requires both representing sensory stimuli and modifying ongoing activity through synaptic plasticity.