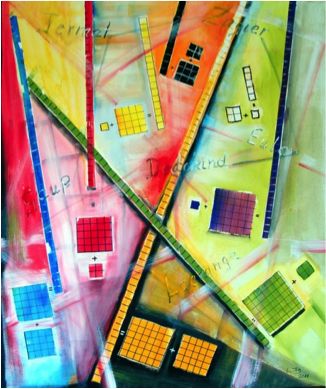 M3 is an event for non-mathematicians, allowing them to take part in an experience that addresses two extreme parts of the brain: The emotional side needed to enjoy classical music and the rational side needed to digest mathematics. Yes, you heard right—digest mathematics. The mathematician Matthias Kreck, professor at Bonn University in Germany, will explain and prove a mathematical theorem—Fermat’s Two Square Theorem—in such a way that everybody will feel the joy of rigorous statements and arguments. The paintings, which explain some of the mathematical statements, combine both sides since they are at the same time emotional and geometric.

Matthias Kreck will also play the Cello accompanied on the piano by Susan Sturm, Professor of Law at Columbia University. The paintings are by Luitgard Ilg from Mainz, Germany.

Fermat’s Two Square Theorem I (with paintings by Luitgard Ilg)