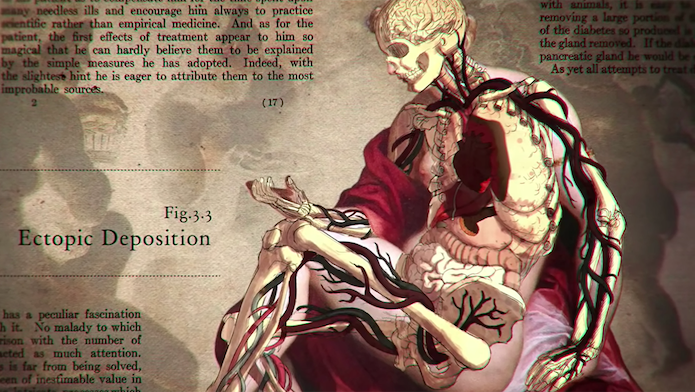 Centered around our understanding of diabetes, Experiments in Science Storytelling is a series of three short films that employ innovative storytelling techniques to challenge misconceptions about the increasingly common disease.

A Brief History of Fat, and Why We Hate It challenges us to rethink fat by explaining why we have it, how it works, and how it may make us sick. It turns out that cutting-edge science is uncovering the wonders of fat, and it’s time the rest of us gave it a second look. Watch the full film here.

Dr. Banting’s Miracle Drug asks, “What does it mean to be a scientific hero?” That provocative question is at the heart of the strange-but-true story of the discovery of insulin in the early 1920s. Before insulin, type 1 diabetes condemned children to a horrible and certain death. But in one of the first miracles of modern medicine, insulin turned diabetes into a manageable chronic condition. History has given Canadian physician Frederick Banting the lion’s share of the credit for the discovery, but the real story is far more nuanced and dramatic. Watch the full film here.

The New Face of Diabetes shows us that 80 percent of type 2 diabetes cases are now occurring in developing nations, and many of these patients don’t fit the stereotype of diabetes patients in the West. The film travels to India, one of the epicenters of what has become a global diabetes epidemic. Most diabetics in the West are obese. In India, they’re not. What’s going on? Watch the full film here.