When he wants to get mathematics done, IAS emeritus professor Pierre Deligne takes to his bed. A big cushion at his back, legs outstretched, reclining atop the covers, he is tucked in by a quilt of papers spread all around.

His office, meanwhile, serves as a staging ground of sorts. Conveniently located just off the mathematics library (all the better for research), it is furnished with a podium and a harvest table of a desk, also slathered in papers and more papers. “I have now too much disorder,” says Deligne. “I need to throw out half of this and file the other half.” But at the moment he can’t spare the time. He is preparing a talk for an upcoming Bourbaki Seminar in Paris.

Deligne, a boyish-looking 67-year-old, got his formative start in mathematics when a high school teacher lent him several volumes of Elements of Mathematics by Nicolas Bourbaki, the pseudonymous éminence grise of French mathematics. From there he never looked back.

He is best known for work he did nearly 40 years ago on the famous conjectures posed by André Weil, the de facto leader of Bourbaki, a secret society of French mathematicians that propagated a comprehensive overhaul and rigorous treatment of modern mathematics based on set theory. Deligne completed his Ph.D. at the Institut des Hautes Études Scientifiques under the legendary Alexander Grothendieck, a Bourbakist who transformed the subject of algebraic geometry. Grothendieck’s results paved the way for the proof of the Weil conjectures, with Deligne completing the proof for the last and most difficult of the conjectures in 1973.

But by some estimations, Deligne’s mentor was discontented or even unhappy with his proof. “Deligne’s proof didn’t make it look trivial,” says Brown’s David Mumford. “It was more spectacular and strange and came out of nowhere.” The two had contrasting styles, and as Mumford described together with Texas’ John Tate in a Science article when Deligne’s won the Fields Medal in 1978: “Deligne was able to use the extensive developments of Grothendieck as well as anyone, but his own ideas were often more concise, more particular. To contrast their styles metaphorically, one could say that Grothendieck liked to cross a valley by filling it in, Deligne by building a suspension bridge.”

For a more pop culture metaphor, Mumford likens Deligne to the ever-loveable Tintin, the iconic comic book adventurer and star of the latest Spielberg movie. Says Mumford, “Tintin is the delicate guy who is fastidious and possesses unerring skills and taste in how he does things.”

Deligne’s inimitable taste makes him outstanding in many of life’s dimensions.

He doesn’t own a car and bicycles everywhere, keeping his right pant leg perennially tucked into his sock. He has quite possibly never been seen in a suit, favoring instead well-worn sweaters in earth tones. In Princeton’s flash rainstorms he has been known to strip down to the waist to minimize the damage, though he does not take this strategy to the logical extreme.

Deligne loves nature and negotiated to buy the house right next to the Institute woods, even though it had been used for administrative space. In wintertime, he has taken to building an igloo in his backyard and spending a few nights sleeping outside. In summertime, he maintains a garden—potatoes, tomatoes, raspberries, gooseberries, leeks, basil, parsley, tarragon, chives. “Some things I like very much and I try but I am not successful,” he says. “I like very much artichoke, not so much to eat them but when they get overripe there is a bud and they open like a flower and they are beautiful. But the climate does not seem to be good for them. Every year I try. I find it very relaxing.”

He cultivates his mathematical labors with a similar perseverance and patience—picking what is ripe from his harvest table of possibilities.

“Some things are there, I have been working on for a very long time, some as long as 1985. There are five or six things in the back of my mind,” he says, noting that inevitably many things are at the “stuck” stage. “[W]hen I have something that’s unstuck me a little bit, then I will work on it.”

Broadly speaking, Deligne notes that the central subject he is interested in, one of the things he really cares about, can be encapsulated with the code word “motive.” As the standard dictionary definition suggests, a motive tries to get at what lies behind, the motivation, but more specifically and mathematically speaking it is the notion of a common theme linking parallel cohomology theories. “It’s the fact that there are a large number of very similar theories, that seem to tell the same story, but we cannot prove that, really,” Deligne explains. “So using analogies, we try to translate theorems or questions from one into the other, and in a few cases one can have some precise theory relating those parallel stories.”

On a more technical level, he elaborates by email: “Algebraic varieties, that is, spaces deﬁned using polynomials equations, have a number of cohomology theories (objects in algebra giving information about shape). The names of those theories don’t tell much (Betti, de Rham, crystalline, l-adic). They are parallel. Motives are largely conjectural, would give an overarching theory, are a useful heuristic, and in a few special cases have a precise deﬁnition, made useful by deep theorems, and have nice applications, such as to multi zeta values (numbers deﬁned as the sum of some speciﬁc inﬁnite series, ﬁrst investigated by L. Euler in the [sic] 1750).”

“The idea is that specific algebraic varieties are instantiations of some more abstract thing,” picks up Mumford. “That is, each motive can be instantiated by multiple varieties. That thing, that motive, would have for instance a kth Betti number which could be computed in any variety that embodied the motive as the dimension of its kth cohomology group, and [for which] it didn’t matter which of the cohomology theories was used. A definite link between two varieties embodying the same motive depends critically on an unproved conjecture, the Hodge conjecture, and so the theory of motives remains a dream.”

While the notion of “motive” originated with Grothendieck, the concept of “1-motives” is one of Deligne’s contributions to the theory.

“What is a 1-motive?” Tate asks himself, reiterating what turns out to be a question difficult to answer using non-mathematical language.

“The first non-trivial level of any motive has this shape, this interpretation, or can be thought of as a 1-motive,” he says. “A 1-motive is a precisely defined, not at all conjectural type of mathematical object (a homomorphism of a free abelian group into a semi-abelian variety), which represents motives of level 1, or the part of dimension ≤ 1 of any motive.”

“This notion has turned out to be extremely useful in many situations,” he adds, “but seems impossible to describe in less technical language.”

The quality that makes Deligne stand apart as a mathematician is also difficult to describe.

“He just does it better,” says Tate. “He’s the greatest, one of the greatest ever. He understands mathematics at a deeper level than most of us. This enables him to have a masterful grasp of very difficult techniques, but besides that he is very original and creative. He’s the whole ball of wax.”

And Jean-Pierre Serre, an early influence on Deligne during his time at IHES, concurs. “The very simple answer is he’s better.”

He is sharp. He goes directly to the point. He has one of the very best minds.

At somewhat of a loss to be more specific, Serre instead offers illumination by counter-example.

“Maybe I tell you some little defects he has when he gives lectures,” he says. “When he gives lectures, he writes extremely small and he speaks so low that it is really hard to understand. And he does not stress anything. He’s not making propaganda for what he’s doing. He’s just telling it.” Serre recalls an international meeting in the 1970s when Deligne was delivering a series of lectures. The audience, desperate to follow along, wrote beneath one of the shifting blackboards during the intermission: “Write Larger and Speak Louder!” After revealing these instructions, Deligne, ever THE anti-showman, obeyed for about two minutes and then returned to his understated status quo.

Deligne’s search for understanding is driven by his insatiable curiosity, almost to a fault (to point out another so-called defect). For example, he voluntarily retired several years early so as to reduce his faculty responsibilities, since in reading applications of prospective members for the School of Mathematics he was forever tempted to try out the applicants’ proposed lines of investigation and thus forever distracted from his own research.

He is also known for understanding things very thoroughly. So much so that when his children had trouble with their homework and sought his help, they had to plead with him—”Please, Daddy, just give us one way!”—lest he explore every possible way of making sense of things. Similarly, he gained a reputation for the extensive notes he complied for his own erudition on various subjects, which colleagues always wanted to obtain, and which he was always happy to share.

“He’s nice, sweet, and super-duper self-actualized,” comments one of his Institute colleagues, theoretical physicist Nima Arkani-Hamed. And even though Deligne is a bit of a solitary character, Arkani-Hamed lauds his willingness to have his brain picked, though the prospect of picking Deligne’s eminent intellect has on occasion seemed intimidating enough to make even a seasoned and reputable mathematician shake in his shoes. But for no reason, says Arkani-Hamed. “There’s no complex layer of façade to get through. He is what he is, and it’s pure.”

“For me he is maybe the best mathematician living at the moment,” concludes Serre. “One could give other names, but then I would say, ‘Well after all I prefer Deligne.’ And I’m certainly not the only one to think that.” 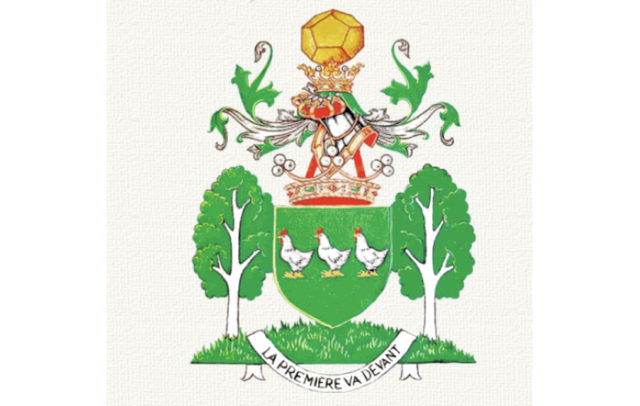 Ennobled as a Viscount in 2006, Deligne designed his own coat of arms. The prominently placed trio of hens was inspired by a nursery rhyme, which by Deligne’s grownup interpretation proceeds as a succession of tautologies. Mathematical discourse, he argues, proceeds in a similar fashion.

Science LivesS. R. Srinivasa Varadhan
May 22, 2019
Science LivesWilliam Browder
June 14, 2017
Science LivesElias Stein
March 13, 2017
Advancing Research in Basic Science and MathematicsSubscribe to our newsletters to receive news & updates
We use cookies to analyze web traffic and to improve your browsing experience; full details are in our privacy policy. Please agree to accept cookies from our site.AGREE