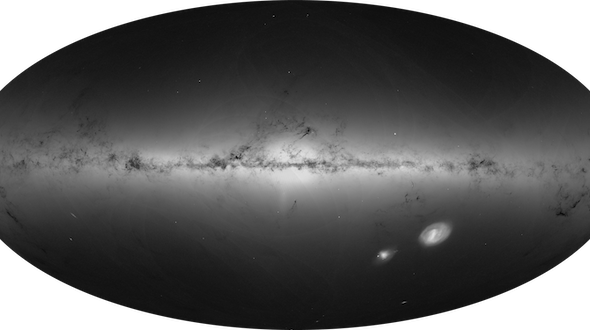 The Galactic Dynamics Group explores how structures in the universe, such as dark matter and stellar halos, galaxy disks, and satellite galaxies and streams, are shaped by gravitational interactions and collective dynamics.

The group works at the interface between large observed and simulated datasets and broadly studies galaxy assembly, galactic structural evolution, and the nature of dark matter. Common research themes in the group include (1) modeling and mining modern stellar surveys such as *Gaia*, APOGEE, and SDSS-V to learn about our galaxy, the Milky Way, (2) performing and analyzing high-resolution, tailored galaxy simulations to study dynamical processes, and (3) using cosmological zoom-in simulations to connect studies of the Milky Way and nearby galaxies to the cosmological context of galaxy formation.

The Galactic disk exhibits complex chemical and dynamical substructure thought to be induced by the bar, spiral arms, and satellites.…

We update the capabilities of the open-knowledge software instrument Modules for Experiments in Stellar Astrophysics (MESA). The new auto_diff module…

Adrian Price-Whelan joined the foundation in 2019 as a member of the Astronomical Data group at the Center for Computational Astrophysics.

Emily joined the Center for Computational Astrophycis as a Flatiron Research Fellow in September, 2019.

Nicolas (Nico) Garavito-Camargo joins us as a Flatiron Research Fellow. Nico earned his Ph.D. in Astronomy and Astrophysics from the University of Arizona.

David W. Hogg is an astrophysicist at New York University’s Center for Cosmology and Particle Physics and the group leader of CCA’s Astronomical Data group. His research has ranged from fundamental cosmological measurements to stellar dynamics to exoplanet searches and characterization.

Danny joined the Center for Computational Astrophysics as a Flatiron Research Fellow in September, 2022.

Jason joined the Center for Computational Astrophysics as a Flatiron Research Fellow.

Melissa Ness joined the foundation in 2018 as an associate research scientist at the Center for Computational Astrophysics.

Read more
Advancing Research in Basic Science and MathematicsSubscribe to Flatiron Institute announcements and other foundation updates
We use cookies to analyze web traffic and to improve your browsing experience; full details are in our privacy policy. Please agree to accept cookies from our site.AGREE