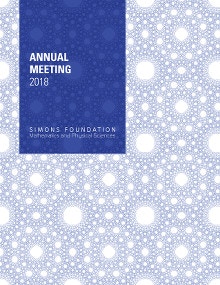 The past decade has seen tremendous success in predicting and experimentally discovering distinct classes of topological insulators (TIs) and semimetals. We review the field, and we propose an electronic band theory that highlights the link between topology and local chemical bonding and combines this with the conventional band theory of electrons. Topological quantum chemistry is a description of the universal global properties of all possible band structures and materials, comprised of a graph theoretical description of momentum space and a dual-group theoretical description in real space. We classify the possible band structures for all 230 crystal symmetry groups that arise from local atomic orbitals and show which are topologically nontrivial. We show how our topological band theory sheds new light on known TIs and demonstrates the power of our method to predict a plethora of new TIs.

Andrei Bernevig is a leader in the lively field of topological electronic states in solids. His initial proposal of the quantum spin Hall effect in HgTe quantum wells was soon followed by dramatic experimental confirmation. He has developed a theoretical framework for topological insulators and written a highly regarded book on the subject. His work on topological superconductivity in metal chains on superconducting surfaces, as well as his prediction of two types of Weyl semimetal states in transition metal monophosphides and WTe2, has stimulated considerable theoretical and experimental activity.

Hearing the Stars: New Insights into Stellar Interiors from Asteroseismology

Long-term and sensitive space-based photometry from the CoRoT, Kepler (and soon TESS) satellites has allowed us to finally ‘hear’ the stars. These remarkable data have yielded accurate measurements of masses, radii and distances for more than 30,000 stars across the Milky Way that have been largely confirmed by the recent GAIA data release. More profoundly, these observations are revealing the interior stellar conditions, clearly differentiating those that are undergoing helium burning in their cores to those that are only burning hydrogen in a shell. Moreover, interior rotation rates for hundreds of stars now test the uncertain physics of how angular momentum is transported within a star, and the absence of dipolar modes in many stars may be indicative of strong internal magnetic fields.

Bildsten’s research spans the fields of stellar astrophysics, gravitational wave phenomena and observational astrophysics. His current efforts are focused on theoretical puzzles raised by the remarkable observational progress in time-domain astrophysics, from exploding stars observed in distant galaxies to unusual binaries or pulsating and variable stars found in our own galaxy. His current efforts are focused on the variability from stars much more massive than the sun, both before they explode as supernovae and after they are blown apart by energy released from their collapsed core. The constant thread in his research for the last decade has been the development and use of the open-source stellar structure and evolution computational code, Modules for Experiments in Stellar Astrophysics (MESA). Available to the international astrophysics community, this instrument for calculation and theoretical exploration has enabled many scientists to become engaged in stellar astrophysics at this time of observational renaissance.

Consider the following two questions. Question 1: Consider the N x N multiplication table (if you went to school in the twentieth century, the case N = 12 should be familiar). How many distinct numbers does it contain? Question 2: Take a pack of N cards and shuffle them randomly. What is the probability that some set of 10 of them stays in the same position (though possibly permuted among themselves, thus for example A, 2, 3, 10 of hearts gets sent to 10, 9,…, A of hearts)?

It turns out that these questions are closely related, but the question about permutations is easier. We will discuss this link, and others like it, including some examples where studying random permutations gives results in number theory.

Ben Green is an expert in analytic number theory. Among his achievements is the Green–Tao theorem, establishing that primes contain arbitrarily long arithmetic progressions.

Spectacular advances in seismic data acquisition by dense, areal arrays driven by the need for new information and converging interests in academic and private sector applications have been producing fast growing volumes of (broadband) waveform data. Moreover, new sensors are being developed, including ones based on ring-laser technology that measure rotational motions, generating new types of data. These developments, in combination with GPS and new InSAR data, are well aligned with the mathematical analysis of seismology- and geodesy-based inverse problems. I will present the dramatic progress that has been made in this analysis enabling new views of Earth’s interior through extreme-scale computing capabilities and providing exciting opportunities for advancing the knowledge of planetary dynamics, chemistry and mineral physics. Inverse problems are at the intersection of different areas of mathematics reflected by different features in the (continuous) recordings that represent hierarchical data complexity associated with different scattering regimes and scales, while honoring real-earth material (mechanical) behaviors. Inverse spectral, geometric inverse and dynamic/static inverse boundary value problems and their interconnections with the inverse source problems pertaining to unknown faults, dislocations, ruptures and microseismicity — founded on (non)linear elastodynamics,  self-gravitation and earthquake dynamics — come into play while reaching into emerging relations between these and deep learning.

Maarten de Hoop is the Simons Chair in Computational and Applied Mathematics and Earth Science at Rice University. He is also a continuing visiting faculty member in the Department of Earth, Atmospheric and Planetary Sciences at the Massachusetts Institute of Technology and at the Graduate University of the Chinese Academy of Sciences. De Hoop received his Ph.D. from Delft University of Technology, the Netherlands. His research interests are in inverse problems, microlocal analysis and large-scale computation as well as in seismology and geodesy. He is well-known for his work in imaging revealing Earth’s interior, including studies of Hawaii and phase transitions in the mantle down to the core. Most recently, his research has branched out into connections between inverse problems and deep learning. As the Simons Chair, De Hoop has continued to work to promote interaction between mathematicians and geoscientists, and collaboration among academia and industry.

Many-body systems often support collective excitations, such as sound or plasma waves. I will discuss a system of interacting fermions known as the Sachdev-Ye-Kitaev (SYK) model. It has a collective mode that corresponds to reparametrization of time and can be described geometrically using the 1+1-dimensional anti-de Sitter space. The causal structure of this effective theory is similar to a black hole, and the dynamics is equivalent to ’t Hooft’s shock waves, which are localized at the past horizon.

This particular type of excitations is related to the butterfly effect (“a flap of a butterfly’s wing in Brazil can set off a tornado in Texas”). Both phenomena represent an exponential instability that is not observable under normal circumstances; detecting it requires either reversing the time evolution or having a reference copy of the system. Black holes and the SYK model exhibit the fastest perturbation growth possible near equilibrium at a given temperature.

Alexei Kitaev’s work on topologically protected states of matter helped found the field of topological quantum computing; his prediction that topological superconductors may sustain Majorana fermions has initiated major experimental activity. His most recent work concerns a simple quantum model that exhibits emergent gravity. Another topic of Kitaev’s research is the mathematical description of quantum phases of matter.

Accelerated Expansion of the Universe: Problems and Progress

The accelerated expansion of the universe demands a more complete framework for quantum gravity and offers new observational handles on high-energy physics. After summarizing the basic observations and theoretical implications, I will explain some recent developments. In string theory, metastable accelerated expansion plausibly results from an interplay of highly structured energy sources. The resulting de Sitter geometry contains horizons, which play a key role in seeding structure, while raising basic conceptual questions. The anti-de Sitter/conformal field theory duality, which formulates quantum gravity in terms of quantum field theory, does not directly apply. We show how it can be upgraded in a way that preserves some essential features, leading to a statistical interpretation of the Gibbons-Hawking horizon entropy in terms of an entanglement entropy in the dual description. Moving from thought experiments back to empirical observations, we provide some new examples of observational probes of high-energy physics in the early universe, taking into account the potential landscape and strong nonlinearities that can build up in cosmology.

Eva Silverstein’s research connects the mathematical structure of string theory to predictions for cosmological observables, leading to broader lessons in primordial cosmology. Her work on axion monodromy provided a theoretically consistent model of large-field inflation and is widely influential in the continuing development of the field. She has also made extensive contributions to the fundamentals of string theory and quantum field theory, with implications for dualities, space-time singularities and black hole physics.

Many quantum systems are strongly interacting and cannot be treated using a standard approach in theoretical physics — perturbation theory. In the talk, Son will describe several approaches that physicists have applied to the problem of strong interaction. One approach originates from Lev Landau and can be applied to a surprisingly large class of systems whose behavior at low energy can be understood through weakly interacting quasiparticles. Another approach comes from string theory and allows one to understand a set of theories through the so-called ‘gravity duals’ in higher spacetime dimensions.

Son’s work has deep impact across several subfields of physics. He has written important papers in quantum chromodynamics, theoretical nuclear physics, condensed matter physics and atomic physics. One of his many contributions concerns the duality between black holes in anti-de Sitter space and strongly interacting fluids. His initial work with Policastro and Starinets on the viscosity of the quark-gluon plasma opened new research directions in heavy ion physics and in string theory, and his subsequent work with Sachdev, Herzog and others established the AdS/CFT duality as a crucial theoretical tool of condensed matter physics. His recent work has helped the uncovering of a non-trivial connection between the quantum Hall effect, spin liquids and dualities in quantum field theories.

A famous and consequential open problem in computer science is to design algorithms that multiply n x n matrices in (nearly) n^2 operations. For almost 50 years, the quest for such an ‘exponent 2’ algorithm for matrix multiplication has captured the imagination of computer scientists and mathematicians alike, and it continues today. In this talk, I will describe how this algorithmic problem is cast as a mathematically appealing question about tensor rank and describe a novel approach that imports the problem into the domain of group theory and representation theory. I’ll discuss generalizations to algebraic objects beyond groups, connections to the recently resolved cap-set problem, and the current state of the art in this program aimed at finding an exponent 2 algorithm for matrix multiplication.

Chris Umans works on complexity theory, algebraic algorithms and randomness in computation. He has established new upper bounds for the complexity of matrix multiplication and has developed novel algorithms for polynomial factorization and for computing the generalized DFT.