The goal of SMAUG is to address a fundamental unsolved problem in theoretical astrophysics and cosmology: how do galaxies assemble and evolve? A key aspect of this is to understand how complex baryonic processes affect the properties of galaxies, the properties of the circumgalactic and intergalactic medium (CGM/IGM), as well as the distribution of dark matter. These cosmic-scale baryonic processes are strongly influenced by “small-scale physics” such as star formation and the resulting energetic “feedback” from young, massive stars, and the formation, growth, and feedback from supermassive black holes (SMBH). However, cosmological galaxy formation simulations do not have sufficient resolution to follow these processes directly and instead adopt subgrid models tuned to match large-scale observational constraints.

The approach adopted by SMAUG is to 1) use carefully designed (small-scale) simulations with the appropriate resolution and physics to understand these processes, and to obtain theoretical predictions for the dependence of key local quantities on the coarse-grained properties of galaxies, 2) use these insights to develop new sub-grid models that can be robustly implemented in cosmological simulations 3) implement these physically grounded sub-grid recipes within a new generation of large volume cosmological simulations, to predict the impact of baryonic processes on a wide range of cosmological probes including gravitational lensing, galaxy clustering, and Cosmic Microwave Background secondary anisotropies. We believe that the elimination of empirical subgrid recipes that are tuned to match observations will lead to a major advance in the predictive power of these models.

In this series of six papers we present some of the first results from this project.

One critical concrete example of fundamental “small scale” physics is the process of the conversion of dense ISM gas into stars, and the ensuing release of energy, momentum, and metals by massive stars and supernovae. This “stellar feedback” can make future generations of star formation less efficient, can drive large scale outflows, and can disperse metals within and outside of galaxies. Information required for cosmological simulations include: the efficiency or timescale of star formation as a function of ISM properties on scales of ~100pc; the mass, momentum, energy, and metal loading factors of multiphase outflows as a function of coarse-grained properties; the phase and velocity distribution of these outflows. Kim et al. (2020) utilize a simulation suite conducted using the TIGRESS framework (Kim & Ostriker 2017), to study the emergent outflow properties in a suite of simulations with initial conditions chosen to represent a set of ~kpc-sizes regions within a Milky Way like galaxy at the present day. TIGRESS includes a very realistic treatment of the interstellar medium, including magnetic fields, galactic differential rotation, resolved star formation, and feedback from massive young stars including both radiative heating and supernovae. 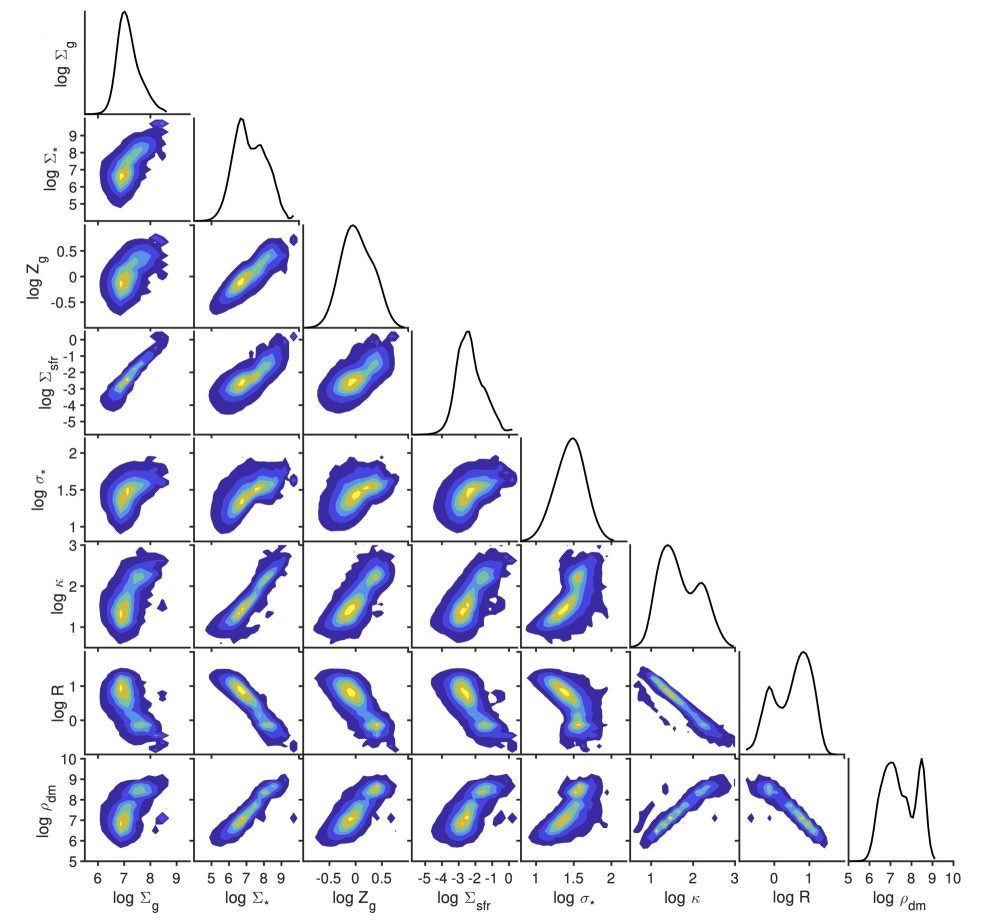 Using these simulations, we can now characterize the multiphase outflow properties (mass, momentum, energy and metals) as a function of properties that can be resolved in (lower resolution) cosmological simulations. A key conclusion is that to properly represent physically-realistic outflows, any subgrid model implementation must incorporate at least two distinct components, one for a hot, fast flow and the other for a cool, slow flow.

Highly resolved ISM simulations can only simulate a small “zone” within a galaxy and are expensive to run. Therefore, they require input on an appropriate choice of initial conditions, such as gas and stellar density, rotation velocity, metallicity, and vertical velocity dispersion, all defined on the scale of the size of the TIGRESS simulation boxes (~500pc-1 kpc). In Motwani et al. (2020), we use a suite of state-of-the-art large volume cosmological simulations from the IllustrisTNG project to study the distributions of these properties across cosmic time. This work demonstrates that stars form in a relatively well-defined three-dimensional manifold within a large eight dimensional space of kpc-scale galactic properties that we investigate. This result will inform one of the next important steps in our program, which is to run additional TIGRESS simulations representing a broader range of initial conditions, representative of different types of galaxies at different cosmic epochs.

Beyond star-forming galaxies, supernovae (Type Ia) also play an important role in the ecosystem of early-type galaxies. These systems have long ceased star formation with an ISM that is predominantly hot and tenuous. By depositing energy and metals, supernovae help to regulate the ISM and may drive galactic-scale outflows. However, how Type Ia supernovae feedback works in detail within the primarily-hot ISM of elliptical galaxies remains unclear. Cosmological simulations lack the resolution to resolve supernovae remnants and often treat them as a uniform heating term at the subgrid level. In Li et al (2020a, b), we examine the role of supernovae by running high-resolution simulations of the kpc-scale hot ISM, which resolve individual supernovae remnants. We examine the uneven heating effect of supernovae, the development of a multiphase ISM, and the energy evolution and turbulence structure of the gas. This study brings new insights into the detailed impact of supernovae feedback in early-type galaxies. Our findings can inform a more physical subgrid recipe for large-scale simulations.

Another key goal of the SMAUG collaboration is to investigate whether we can develop methods to capture the essential physics of galaxy formation in a more computationally efficient manner than fully numerical cosmological simulations. A method that has been widely used for decades and has yielded many insights into galaxy formation is known as “semi-analytic modeling” (SAM). Instead of explicitly solving the equations of gravity, thermodynamics, hydrodynamics, etc., using particles or grid cells, SAMs can be thought of as tracking flows of mass between different galactic components (e.g., stellar bulge and disk, ISM, CGM, IGM, etc.), using a set of coupled ordinary differential equations. Traditionally, the fairly simple parameterizations used in SAMs have been calibrated using galaxy observations. We would like to investigate the extent to which SAMs can be re-tooled and calibrated to “emulate” the results of cosmological and/or resolved ISM hydrodynamical simulations that are themselves not as phenomenological in nature as SAMs.

In doing so, we may be able to develop a more physically realistic and predictive rather than descriptive SAM. A first exploration of this vision is presented in Pandya et al. (2020), in which we compare the global properties and baryon cycle of galaxies in the FIRE-2 suite of cosmological “zoom-in” simulations to predictions from a SAM that has been run within merger trees extracted from these same simulations. We find systematic discrepancies between the two models (especially for low-mass galaxies), the most severe of which are likely driven by the standard approximations made in SAMs for modeling stellar feedback and the cooling and recycling of circumgalactic halo gas. As a first step towards resolving these model tensions, we present a simple yet promising new “preventative” stellar feedback model in which the energy carried by supernova-driven winds is allowed to heat some fraction of the gas outside of halos to sufficiently high temperatures so that accretion is suppressed. This first study confirms the usefulness of SAMs for transparently distilling the key physical insights from more sophisticated simulations and will guide our ongoing efforts to build a next-generation “hydro-calibrated” SAM. 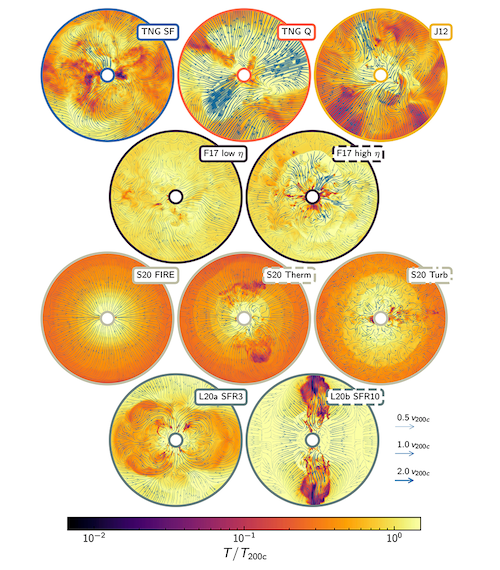 The circumgalactic medium is now recognized as a key element in understanding galaxy formation, as a critical component in the global baryon cycle. Recent observations have shown that the CGM is a complex environment, containing enriched gas spanning a broad range of temperatures and densities, with diverse kinematic properties. Because of its low density, the CGM in standard existing cosmological simulations is typically poorly resolved (as an example, the spatial resolution in the CGM in the IllustrisTNG100 simulations ranges from about 1-10 kpc). Robust sub-grid recipes for outflows must properly treat how these outflows interact and mix with the CGM. The development of thermal instabilities and the evolution of (potentially tiny) cold clouds are also potentially important but poorly understood. Fielding et al. (2020) compare the properties of the CGM, including profiles and distributions of gas temperature, density, pressure, and velocity, in Milky Way mass halos in a broad range of cosmological and idealized simulations. They find that, broadly, the hot component of the CGM is similar across the models, but that significant differences are present in the prevalence of the cold phase — in particular, while multiphase gas can be produced in the inner halo by galactic winds, only the cosmological simulations generate cool gas in the outer halo, pin-pointing this (along with rotation) as a key difference between idealized and cosmological models.

These first papers provide key deliverables in our collaboration’s goal to make physics-based predictions of the distribution of stars, gas and dark matter on cosmological scales. However, they are just the first step — a key near term goal is the creation of a subgrid model for the evolution of multiphase gas as it is launched from the disk and flows through the halo. This work will build on a number of the advances announced above and is intended to replace existing wind models in cosmological systems. Longer term goals include an improved understanding of the role of black hole accretion and feedback in galaxy quenching and the development of a subgrid model to describe those processes.

Back to SMAUG homepage