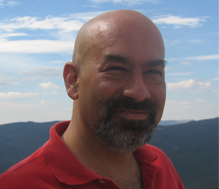 This talk focuses on results from NASA’s Wilkinson Microwave Anisotropy Probe (WMAP) and from other recent cosmological experiments and show how they have addressed these questions.

While there has been significant progress, many key cosmological questions remain unanswered: what happened during the first moments of the big bang? What is the dark energy? What were the properties of the first stars? Do neutrinos affect the formation of galaxies and structure? This lecture addresses how future observations from Subaru and from upcoming microwave background experiments may start to answer these new questions.

David Spergel is the Chair of the Department of Astrophysical Sciences at Princeton University. He also is the Charles A. Young Professor of Astronomy on the Class of 1897 Foundation and an Associate Faculty Member in the Physics Department and in the Mechanical and Aerospace Engineering Department. Spergel is also currently co-chair of the NAS Committee on Astronomy and Astrophysics.

Spergels research in theoretical astrophysics ranges from the search for planets around nearby stars to the shape of the universe.

Over the last few years, the WMAP Satellite has been the main focus of his research. WMAP was successfully launched on June 30, 2001.

Spergel is part of a group of scientists and engineers at Princeton University who are developing new technologies that should hopefully enable the direct imaging of earth-like planets. He is part of the new Princeton Center for Theoretical Science. In 2008/9, the program was focused on “Big Bang and Beyond”. Spergel is also part of the new Institute for the Physics and Mathematics of the Universe (IPMU).

Plasticity and the Aging Brain

Solving for Early-Career Challenges in Autism Research
Advancing Research in Basic Science and MathematicsSubscribe to Flatiron Institute announcements and other foundation updates
We use cookies to analyze web traffic and to improve your browsing experience; full details are in our privacy policy. Please agree to accept cookies from our site.AGREE