The Princeton University physicist Eugene Wigner delivered the first Courant Lecture at New York University with a catchy title that stuck in the public’s imagination — “The Unreasonable Effectiveness of Mathematics in the Natural Sciences.” (Wigner’s talk was later published in the February 1960 Communications on Pure and Applied Mathematics.) Wigner asked a startlingly simple question: Why does advanced mathematics, created merely to demonstrate the mathematician’s “ingenuity and sense of formal beauty,” often turn out to be exactly what scientists need to understand the natural sciences? Why is it that abstract mathematics, which has gone far beyond anything Galileo might have imagined, seems to be accidentally effective in describing the real world? Wigner was a physicist, and his examples were largely from physics — complex numbers and electromagnetism, Hilbert spaces and quantum mechanics, differential geometry and general relativity — but hundreds of similar examples arise today in every field of science.

At its heart, Wigner’s talk was about usefulness. Mathematics is useful — unreasonably so — and that seemed mysterious. Something similar can be said for much of science itself. Why study mathematics that is far removed from the everyday world? We might as well ask, Why study the origins of life? Why wonder what the universe will be like when it’s five times its present age?

Why ask what’s inside a black hole? Scientists as well as mathematicians work on ideas that appear to be useless, but that occasionally turn out to be exactly what’s needed for an astounding breakthrough. These scientists are not on a mission to solve some pressing problem of humanity; they are merely curious, like a 5-year-old, incessantly asking “Why?”

Why ask what’s inside a black hole? Scientists as well as mathematicians work on ideas that appear to be useless, but that occasionally turn out to be exactly what’s needed for an astounding breakthrough. These scientists are not on a mission to solve some pressing problem of humanity; they are merely curious, like a 5-year-old, incessantly asking “Why?”

In fact, 20 years before Wigner’s famous talk, Abraham Flexner wrote another famous essay, titled “The Usefulness of Useless Knowledge” (which appeared in the October 1939 Harper’s Magazine). Flexner wasn’t surprised by the usefulness of seemingly useless research. “Throughout the whole history of science,” he wrote, “most of the really great discoveries which had ultimately proved to be beneficial to mankind had been made by men and women who were driven not by the desire to be useful but merely the desire to satisfy their curiosity.” But Flexner’s point was slightly different from Wigner’s. Although some research might eventually be useful, he was “not for a moment suggesting that everything that goes on in laboratories will ultimately turn to some unexpected practical use or that an ultimate practical use is its actual justification.” Instead, curiosity is its own good — seeking knowledge merely for the sake of curiosity is “the ruling passion of intellectual life in modern times.” Flexner founded the Institute for Advanced Study in Princeton with this in mind; mathematics was its first subject.

Which is the right motivation for science — mission or curiosity? Policymakers and scientists have debated this question for more than a century. It played a central role in the formation of the National Science Foundation in the mid-20th century (curiosity won). It shaped the creation of the U.S. space program and its evolution (mission often won). It influenced the European Union’s science policy when the EU was formed (perhaps a tie). The debate affects research funding today, both public and private.

Mission-driven research has recently had the edge. In a world shaped by science and mathematics, the argument in its favor is powerful and pragmatic: Science has already improved the human condition immeasurably and has the potential to do much more. Faced with massive and persistent human problems, society has a moral obligation to invest its resources in solving those problems. To some, the arguments for curiosity (Wigner’s and Flexner’s) have become less persuasive. Yes, it’s hard to predict which curiosity- driven research will be accidentally useful, but science has advanced so much in recent decades that surely it can now predict the parts that will be ultimately useful. And yes, curiosity may “free the human spirit,” but the vast, sophisticated tools of modern science, often appreciated by only a few experts, make curiosity somewhat frivolous. Science has moved beyond ‘mere’ curiosity, the argument goes. 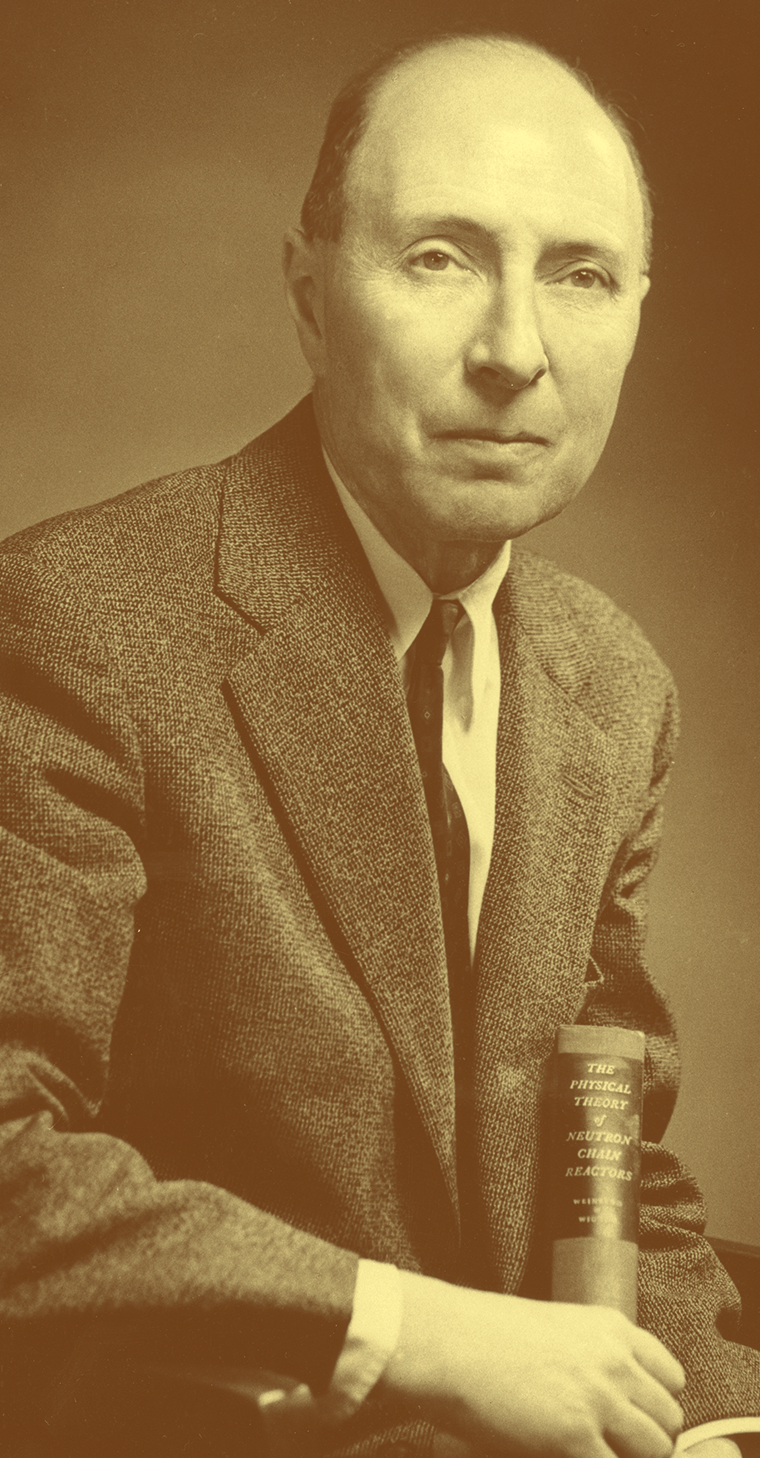 EUGENE P. WIGNER was a Princeton University physicist who won the 1963 Nobel Prize in physics for “his contributions to the theory of the atomic nucleus and the elementary particles, particularly through the discovery and application of fundamental symmetry principles.” Three years before, he had published a deeply influential article in the journal Communications on Pure and Applied Mathematics, from a lecture he had given. In his article, titled “The Unreasonable Effectiveness of Mathematics in the Natural Sciences,” he argued that the mathematics underpinning physics theories often leads to new insights and predictions about those theories.

Wigner wanted to make two key points. “The first point is that mathematical concepts turn up in entirely unexpected connections. Moreover, they often permit an unexpectedly close and accurate description of the phenomena in these connections. Secondly, just because of this circumstance, and because we do not understand the reasons of their usefulness, we cannot know whether a theory formulated in terms of mathematical concepts is uniquely appropriate. We are in a position similar to that of a man who was provided with a bunch of keys and who, having to open several doors in succession, always hit on the right key on the first or second trial. He became skeptical concerning the uniqueness of the coordination between keys and doors.”

He continued: “The first point is that the enormous usefulness of mathematics in the natural sciences is something bordering on the mysterious and that there is no rational explanation for it. Second, it is just this uncanny usefulness of mathematical concepts that raises the question of the uniqueness of our physical theories.”

But such an argument shows a profound misunderstanding of the nature and scale of science. Another great intellect of the 20th century, Richard Feynman, pointed out the flaw in the argument. In a 1955 talk (later published as “The Value of Science” in the December 1955 Engineering and Science), Feynman observed that science is not about what we know — it’s about what we don’t know. Science is about ignorance, doubt and uncertainty. We see ignorance as undesirable in everyday life; we attempt to dispel doubt; we view uncertainty as uncomfortable. But science uniquely embraces all three — on a vast scale, far beyond normal human experience.

We have made spectacular scientific advances in the past few decades: planetary explorations in and out of our solar system, a new ability to manipulate genes and life itself, remarkable insights into the human brain, new materials that behave in unheard-of ways, powerful mathematics to deal with vast repositories of data, and much, much more. And yet … we still don’t know what 95 percent of the universe is made of or why the universe is moving apart more rapidly than expected. We don’t know how to connect gravity with quantum mechanics or whether either is complete or correct. We don’t know the purpose of most of our DNA or whether there is a purpose. We don’t know whether materials can conduct electricity without resistance at human temperatures or how many exotic materials may yet be discovered. We know little about the human brain or how consciousness works. We don’t know how life on Earth first arose or whether carbon is required for the chemistry of life. We don’t know. We don’t know about the universe or how it came to be.

In 1977, NASA launched the two Voyager satellites to travel beyond our solar system. In about 40,000 years they will reach the distance to the nearest star. What will science or mathematics look like when that happens, after 1,600 generations? (Will generations even have meaning?) In a billion years, all plant life on Earth will have long since perished for lack of carbon dioxide, a result of changes brought on by a brightening sun. Will sentient beings continue to inhabit the Earth? In a trillion years all stars like our sun will have burned themselves out, leaving only white dwarfs. What will the universe look like then? Or in a trillion trillion years, when starlight is gone for good? These are inconceivably vast expanses of time — roughly 100 trillion times the present age of the universe. Science tells us something about this future, but mainly it teaches us humility. Our science and mathematics are in their infancy.

Ignorance makes clear the distinction between mission-driven and curiosity- driven research. A mathematician would say mission science is ‘local.’ It’s about the things in one’s immediate neighborhood, nearby in space and time. Curiosity science is ‘global.’ It asks questions because we are compelled to ask them, because the universe is vast and we know so little about it. In mathematics, both points of view are valuable. The same is true in science.

Is it unreasonable that we can’t predict which bits of science or mathematics will eventually be useful? Surely not. If we know so little, how can we predict what will be useful in 10 years, much less a million? Is it frivolous to be curious about the nature of time, the origins of life, or exotic spheres instead of building more efficient cars, producing improved strains of rice, or creating a new vaccine? Surely not. We are profoundly ignorant. Being incurious would be foolhardy.

In the end, Wigner’s unreasonable effectiveness is not so mysterious after all. The ignorance embraced by science includes our inability to comprehend the future. Curiosity is the ruling passion of intellectual life for a reason, as Flexner pointed out — we have so much to be curious about.

A billion years from now, when humans have long since left the dying Earth, we’ll be far less ignorant … but we’ll still know only a little. Science reassures us that this is reasonable.

John Ewing is president of Math for America, which is a fellowship program for accomplished K–12 math and science teachers. Previously, he was executive director of the American Mathematical Society and a professor of mathematics at Indiana University. He also stars in the foundation’s auditorium safety video.

This article is part of the “Five Things We Find Beautiful” section of the foundation’s 25th anniversary book.