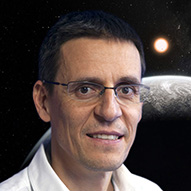 After two decades of discoveries, planets orbiting other stars (exoplanets) capture the interest of both scientists and the public with the daunting prospect of the search for life in the Universe. The nearest ultra-cool stars offers us a unique opportunity to pioneer this quest. Due to their small luminosity and their size, the habitable zone region on these ultra cool stars is 30-100 times closer than for the Sun. A transit signature of an Earth size planet in orbit would be deep and short enough to be detected from the ground. No planet in transit has yet been detected around them, but theory predicts a large population of close-in terrestrial planets.

We plan to carry out a survey for planet of thousand of ultra cool stars almost uniformly spread in the whole sky, mmag photometric precision obtained at high cadence is required to detect a fast event produced by a short period Earth size planet in transit. We are building a new facility made of 4 telescopes of 1m-mirror diameter: SPECULOOS (Search for Planets Eclipsing Ultra-cOOl Stars). Consideration on the survey outcome suggests a dozen of small size transiting planet will be found possibly including Earth size planet and located in the Habitable zone.

Bio: Until recently, the Solar System has provided us the only basis for our knowledge of planets and life in the universe. This has dramatically changed with the discovery Didier Queloz made with Michel Mayor in 1995 of the first giant planet outside the solar system. This discovery has spawned a real revolution in astronomy both in terms of new instrumentation and understanding of planet formation and evolution. He has been involved since in a successful series of developments of precise spectrographs, considerable improving the precision of the Doppler technique. In 2007, in the emerging area of planetary transit detection, he established a successful international collaboration with the WASP team from UK, providing the spectroscopic confirmation and precise photometry follow-up to confirm and characterize planetary candidates. He also took an active part as Co-I in the Corot mission that was a pioneer in the transit detection from space. In this program he conducted a part of the work that led to the first transit detection of a rocky planet (Corot-7). In addition to his research activity he is keen to promote scientific research to the public by sharing the excitement of astrophysics discoveries and particularly the exoplanet theme. He has participated in many documentary movies and has written a book for kids and teenagers. Recently he has moved to Cambridge to conduct a broad coherent effort towards the detection and characterization of planets with the goal of advancing our understanding of their formation, their structure, and eventually their habitability.

Advancing Research in Basic Science and MathematicsSubscribe to Life Sciences announcements and other foundation updates
We use cookies to analyze web traffic and to improve your browsing experience; full details are in our privacy policy. Please agree to accept cookies from our site.AGREE