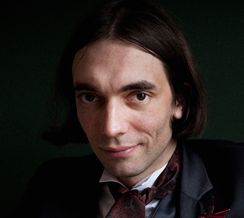 Cédric Villani, a foremost thinker at the interface of mathematics and physics and a 2010 Fields Medal winner, presented the 2013 Math for America (MƒA) Distinguished Lecture at the Simons Foundation’s Gerald D. Fischbach Auditorium on October 2.

The talk, “Of Triangles, Gases, Prices and Men,” focused on the fundamentally similar mathematical underpinnings of three fields: gas dynamics, which focuses on the motions of gases and those motions’ effect on physical systems; non-Euclidean geometry, a branch of geometry based on a particular set of axioms; and economics.

A relatable speaker, Villani engaged and taught listeners by employing a variety of approachable topics to the complex mathematics of transport, from art and history to personal anecdotes, and even cartoons, presenting the material in a way that a both the general public and these STEM educators could not only enjoy but understand as well.

Some 150 people, the majority of them teachers and members of the MƒA community, attended the lecture. Following the talk, guests participated in a question and answer session that covered topics from Villani’s early life to his mathematical achievements.

Villani’s primary work has been on the theory of optimal transport, which seeks to find the most spatially and financially efficient way to package and transport units of mass, factoring in the origin and eventual destination of that mass. In addition, he has worked on the Boltzmann equation, which describes the behavior of thermodynamic systems in physics, and on Landau damping, which has to do with the damping of wave propagation

Since receiving the Fields Medal in 2010, Villani has committed himself to promoting STEM scholarship around the world.

Empowering the Future of Fusion Energy
Center for Computational Biology

A Software, a Community and a Different Way to Do Science By Susan Reslewic Keatley, Ph.D.
Advancing Research in Basic Science and Mathematics Subscribe to our newsletters to receive news & updates
We use cookies to analyze web traffic and to improve your browsing experience; full details are in our privacy policy. Please agree to accept cookies from our site.AGREE