Download the meeting booklet
for agenda, abstracts and
other annual meeting details: 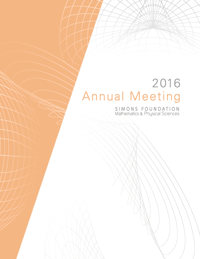 The 2016 annual MPS meeting took place October 20–21. It featured exciting talks about research at the frontiers of math, physics and theoretical computer science, as well as lively discussions among the heterogeneous crowd of attending scientists.

The keynote speaker, Mina Aganagic, talked about math and string theory duality. In string theory, it is often the case that there are two very different mathematical descriptions of the same physical situation. The two descriptions are dual to each other, and the dictionary that translates from one description to the other is highly non-trivial. This leads to very surprising conjectural equivalences between mathematical objects that seem to be very different. In many cases, mathematicians have been able to prove these equivalences. The equivalences are very powerful, since they can relate very difficult computations, such as counting curves of given degrees in an algebraic manifold to much simpler classical computations in the dual picture. The dualities can also be used for defining new quantities such as knot invariants. Aganagic surveyed several notable dualities and ended with the announcement of a recent proof, due to Frenkel, Okounkov and herself, of a quantum geometric Langlands correspondence, which generalizes the classical geometric Langlands correspondence, itself a major result. The proof relies on an electromagnetic duality theory in six dimensions and the introduction of a quantum version of K-theory.

The relationship between mathematics and physics has a long history. Traditionally, mathematics provides the language physicists use to describe nature. In turn, physics brings mathematics to life, by providing inspiration and interpretation. String theory is changing the nature of this relationship. Aganagic will try to explain why and give listeners a flavor of the emerging field.

Mina Aganagic applies insights from quantum physics to mathematical problems in geometry and topology. She made deep and influential conjectures in enumerative geometry, knot theory and mirror symmetry using predictions from string theory and M-theory.

Biological tissues are living materials, with material properties that are important for their function. Recent experiments have shown that many tissues, including some involved in embryonic development, lung function, wound healing, and cancer progression, are close to a liquid-to-solid, or “jamming,” transition, similar to the one that occurs when oil and liquid are mixed to make mayonnaise. In mayonnaise and materials like it, a disordered liquid-to-solid transition occurs when the packing density of oil droplets increases past a critical threshold. Over the past 20 years, physicists and mathematicians have made progress in understanding the universal nature of this transition. However, existing theories cannot explain observations of jamming transitions in confluent biological tissues, where there are no gaps between cells and the packing density is always unity. Manning will discuss a theoretical and computational framework for predicting the material properties of such biological tissues, and show that it predicts a novel type of critical rigidity transition, which takes place at constant packing density and depends only on single cell properties, such as cell stiffness. She will show that our a priori theoretical predictions with no fit parameters are precisely realized in cell cultures from human patients with asthma, and she will discuss how we are applying these ideas to understand other processes, such as embryonic development and cancer progression.

Lisa Manning started her research career in the physics of glasses, i.e., how a disordered group of molecules or particles freezes into a rigid solid at a well-defined temperature. She then turned her attention to morphogenesis, the process by which embryos transform from a spherical egg to a shape we recognize as an insect, plant or mammal, showing that aspects of this process could be modeled by surface tension in analogy with the description of immiscible liquids. Her most recent work uses ideas from the physics of glasses to describe the mobility of cells organized in sheets and applies to a broad class of biological tissues, including embryos and cells from asthma patients.

Geometry and Algebra: From Local to Global

Arithmetic geometry views algebraic and arithmetic objects, such as numbers, in a geometric way. This interplay between number theory and algebraic geometry has been a source of inspiration in modern mathematics, as it permits the study of number theoretic problems via geometric methods. Having led to the solution of a number of conjectures, including Fermat’s Last Theorem, it continues to give rise to deep and important problems in algebra.

Julia Hartmann has been a professor at the University of Pennsylvania since 2014. Prior to that, she was the head of a research group at RWTH Aachen University and a von Neumann Fellow at the Institute for Advanced Study.

Hartmann’s research focuses on problems in algebra with relations to differential algebra and arithmetic geometry. The connecting theme of the questions she works on is the study of symmetries, i.e., of actions of groups on various algebraic objects. In collaboration with David Harbater, she developed the method of field patching. Among the most exciting applications of field patching are local-global principles for numerical invariants associated to fields.

Cryptography, the science of secure communication, has advanced considerably in the last fifteen years. With the introduction of tools, such as bilinear maps, multilinear maps and integer lattices, applications that were previously out of reach became possible and sometimes even quite practical. This talk will survey some of these recent developments, giving examples of constructions and proofs techniques, and posing some open problems that are central to further progress.

Dan Boneh is an expert in cryptography and computer security. One of his main achievements is the development of pairing-based cryptography, giving short digital signatures, identity-based encryption and novel encryption systems.

Daniel Eisenstein will discuss how the acoustic oscillations that propagate in the cosmic plasma during the first million years of the universe provide a robust method for measuring the cosmological distance scale. The distance that the sound can travel can be computed to high precision and creates a signature in the late-time clustering of galaxies that serves as a standard ruler. Maps from the Sloan Digital Sky Survey (SDSS) reveal this feature, yielding accurate measurements of the expansion history of the universe. Eisenstein will describe the theory and practice of the acoustic oscillation method and highlight the latest cosmology results from SDSS.

Daniel Eisenstein is a leading figure in modern cosmology. He is known for utilization of the baryon acoustic oscillations standard ruler for measuring the geometry of the universe, which underpins several large, upcoming ground and space missions. Eisenstein blends theory, computation and data analysis seamlessly to push the boundaries of current-day research in cosmology.

Symplectic Topology Away from the Large Volume Limit

Symplectic topology is unique within geometry, in that the deeper structure of the spaces under consideration appears only after non-local “instanton corrections” have been taken into account. This is most readily apparent from a string theory motivation, but it also has a direct impact on classical problems from Hamiltonian mechanics. In the theory, the instanton corrections are set up as small perturbations, which corresponds to thinking of the target space as having infinitely large size (the “large volume limit”). Mirror symmetry suggests that it would be interesting to keep the size finite. Attempting to do that has seemingly paradoxical consequences, which one can sometimes get a handle on by changing the space involved. The talk will give an introduction to this problem, based on simple examples, and explain a little of what is known or expected.

Paul Seidel has done major work in symplectic geometry, in particular on questions inspired by mirror symmetry. His work is distinguished by an understanding of abstract algebraic structures, such as derived categories, in sufficiently concrete terms to allow one to derive specific geometric results. On the abstract side, Seidel has made substantial advances toward understanding Kontsevich’s homological mirror symmetry conjecture and has proved several special cases of it. In joint papers with Smith, Abouzaid and Maydanskiy, he has investigated the symplectic geometry of Stein manifolds. In particular, work with Abouzaid constructs infinitely many nonstandard symplectic structures on any Stein manifold of sufficiently high dimension.

The University of Texas at Austin
Simons Investigator in Physics

In this talk, Andrea Alù will discuss recent work focused on breaking reciprocity and time-reversal symmetry in metamaterial structures, spanning acoustics, radio waves, nanophotonics and mechanics, without relying on magnetic bias. Alù’s and his collaborators’ approaches are based on using suitably tailored mechanical motion, spatio-temporal modulation and large nonlinearities in coupled resonator systems to realize unusual wave-matter interactions. Alù will discuss the theoretical framework and the modeling, design and implementation of non-reciprocal devices that break Lorentz reciprocity and achieve electromagnetic isolation without using magnetic bias. He will also discuss the impact of these concepts on things ranging from basic science to integrated technology, and how this platform may be at the basis of topological insulators for light, sound and mechanical waves.

Andrea Alù’s work on the manipulation of light in artificial materials and metamaterials has shown how clever designs may surpass what had previously been thought to be limitations on wave propagation in materials. He has developed new concepts for cloaking, one-way propagation of waves in materials, dramatic enhancement of nonlinearities in nanostructures and ultrathin optical devices based on metasurfaces and twisted metamaterials.

Five Points on a Sphere

Thomson’s problem, going back to 1904, asks how N points on the sphere are arranged so as to minimize the Coulomb potential, i.e., the sum of the reciprocal distances taken over all pairs of points. A generalization involves using other power law potentials besides the Coulomb potential, i.e., summing other powers of the distances over all pairs of points. The Coulomb potential corresponds to exponent -1. The case N = 5 has been notoriously intractable. Schwartz will sketch my computer-assisted but still rigorous proof that the triangular bi-pyramid is the potential-minimizing configuration with respect to all power laws with exponent in [-13, 0) and the potential-maximizing configuration when the exponent is in (0, 2). As Schwartz will explain, these ranges of exponents are fairly sharp.

Richard Schwartz was born in Los Angeles in 1966. In his youth, he enjoyed video games and sports, especially tennis. He got a B.S. in math from University of California, Los Angeles in 1987 and a Ph.D. in math from Princeton University in 1991. He gave an invited talk at the International Congress of Mathematicians in 2002. He is currently the Chancellor’s Professor of Mathematics at Brown University. He likes to study simply stated problems with a geometric flavor, often with the aid of graphical user interfaces and other computer programs that he writes himself. Aside from his work in math, he has written and illustrated a number of picture books, including You Can Count on Monsters, Really Big Numbers, Gallery of the Infinite and Man Versus Dog.