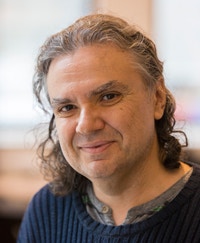 Mathematician Alex Eskin of the University of Chicago has been awarded the 2020 Breakthrough Prize in Mathematics. The award recognizes Eskin for his “revolutionary discoveries in the dynamics and geometry of moduli spaces of Abelian differentials, including the proof of the ‘magic wand theorem’ with Maryam Mirzakhani.” (The magic wand theorem received its whimsical name due to its usefulness across many areas of mathematics.)

One product of Eskin and Mirzakhani’s mathematical collaboration addressed a long-standing thought problem: A beam of light from a point source bounces around a mirrored room. Will the beam eventually cross every point in the room, or will some areas remain permanently dark? The mathematicians proved that for room layouts with angles that are fractions of whole numbers, some areas would remain unlit.

Simons Fellow in Math Charles Doering (1956‑2021)
Subscribe to MPS announcements and other foundation updates
We use cookies to analyze web traffic and to improve your browsing experience; full details are in our privacy policy. Please agree to accept cookies from our site.AGREE