Scientific Leadership Scientific Leadership
The Simons Foundation’s research and grant-making divisions are spearheaded by accomplished scientists. These individuals bring expertise, experience and creative thinking to overcoming the uncertainty involved in advancing research in mathematics and the basic sciences. 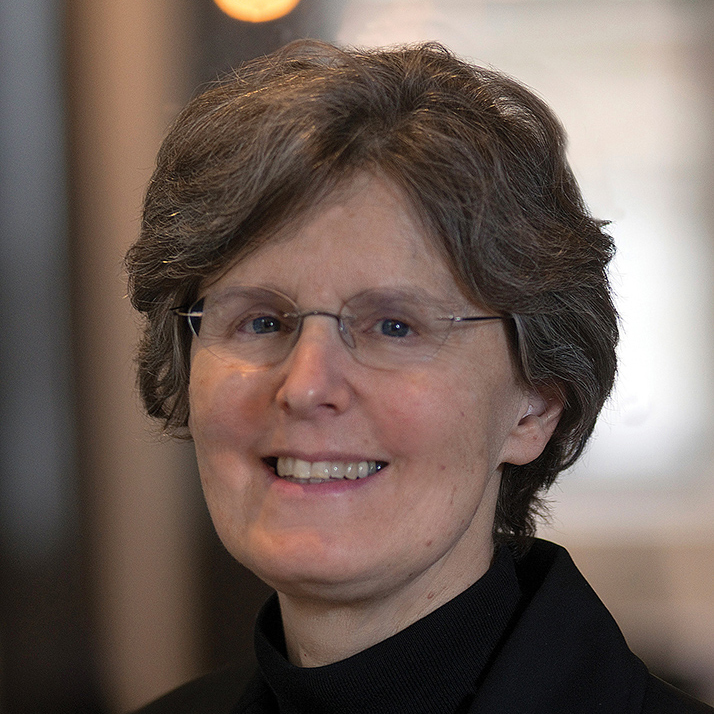 Marian Carlson is director of the Simons Foundation’s Life Sciences division. The division supports, alongside more traditional awards programs, collaborations devoted to the study of marine microbial ecosystems and the origins of life. These research areas contain “huge unknowns and great complexity,” she says. The rock record from the time life arose on Earth has been erased almost entirely, she says, and marine microbial communities across the world contain incredible diversity.

Carlson’s interest in the life sciences comes from a lifelong fascination with the outdoors and the biosphere. She majored in biochemical sciences, examining living cells at the molecular level, and earned her Ph.D. from Stanford University. She is professor emerita of genetics and development at Columbia University and served as senior associate dean and vice dean for research at the medical school. Her laboratory used genetic analysis to identify and study conserved mechanisms of signal transduction and transcriptional regulation. 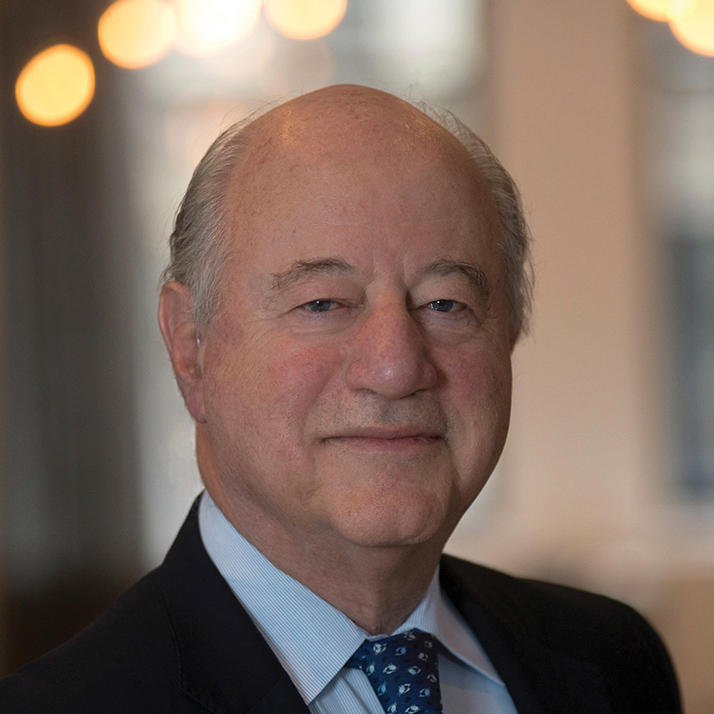 “The human brain is the most complex and mysterious object in the known universe,” says Gerald D. Fischbach, distinguished scientist and fellow at the Simons Foundation. “Once we understand even a hint about how nerve cells in the brain give rise to thoughts, emotions and behavior, it will break open a whole new world.”

Fischbach first wondered how the mind works while taking philosophy courses in college. Seeing few graduate programs in neuroscience, he decided to attend medical school. He went on to Harvard University, where he studied the formation and maintenance of synapses, which play an essential role in communication in the brain. His expertise led to professorships at Washington University and Harvard Medical School. He subsequently served as director of the National Institute of Neurological Disorders and Stroke and then as executive vice president for health sciences at Columbia University.

In 2006, Fischbach joined the foundation as founding director of the Simons Foundation Autism Research Initiative (SFARI). As a founder of the Simons Collaboration on the Global Brain, Fischbach says, “The Global Brain studies internal mental states; SFARI studies how the brain develops. I am optimistic that these projects will enhance one another.” 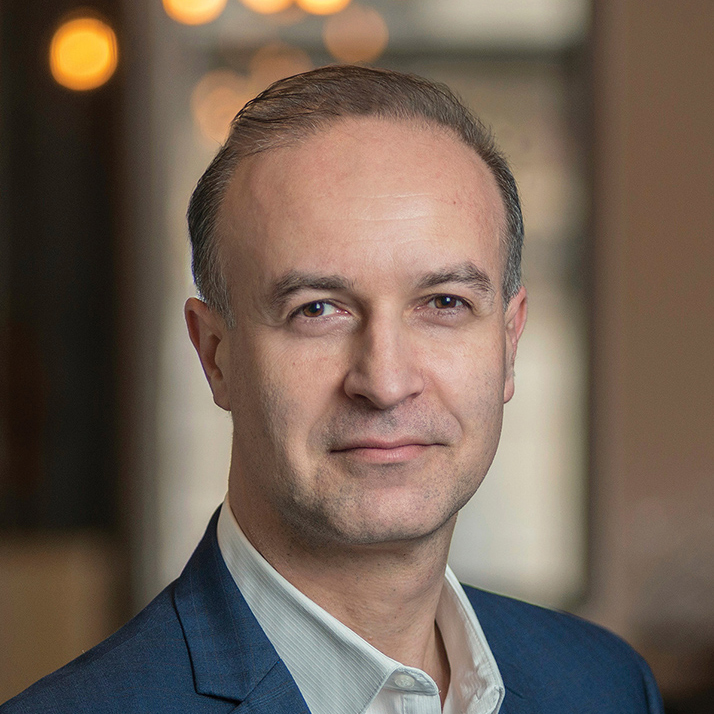 Gregory Gabadadze joined the Simons Foundation in 2017 as associate director for physics in the Mathematics and Physical Sciences division. He is chair of the physics department at New York University and served as director of the university’s Center for Cosmology and Particle Physics.

In high school, he was inspired by an article that explained that a vacuum isn’t truly empty but instead is populated by fleeting virtual waves and particles popping in and out of existence due to quantum uncertainty. That germ of wonderment led him to earn a Ph.D. from Rutgers University, after which he began researching the universe at the smallest and largest scales by studying particle physics, gravity and cosmology. 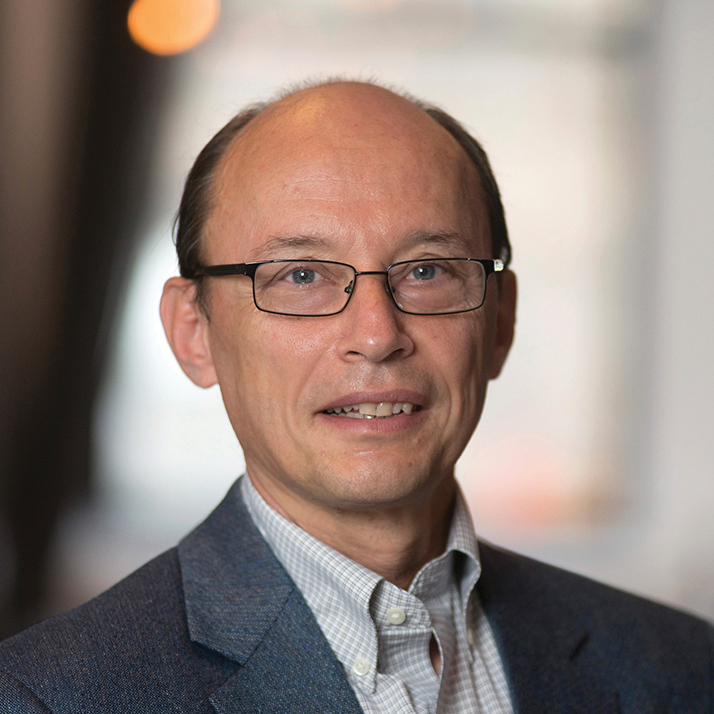 Greengard has, fittingly, both an M.D. and a Ph.D. in computer science from Yale University. He is director of the Center for Computational Biology (CCB) at the Flatiron Institute and Silver Professor of Mathematics and Computer Science at New York University. Together with Vladimir Rokhlin, he developed the fast multipole method, a mathematical technique with a wide range of applications that speeds up the calculation of long-range forces in the n-body problem. The Institute of Electrical and Electronics Engineers named the method one of the top 10 algorithms of the 20th century.

As director of the CCB, Greengard oversees groups working on modeling frameworks, algorithms and software to help scientists probe large experimental datasets for new insights into the biological world. 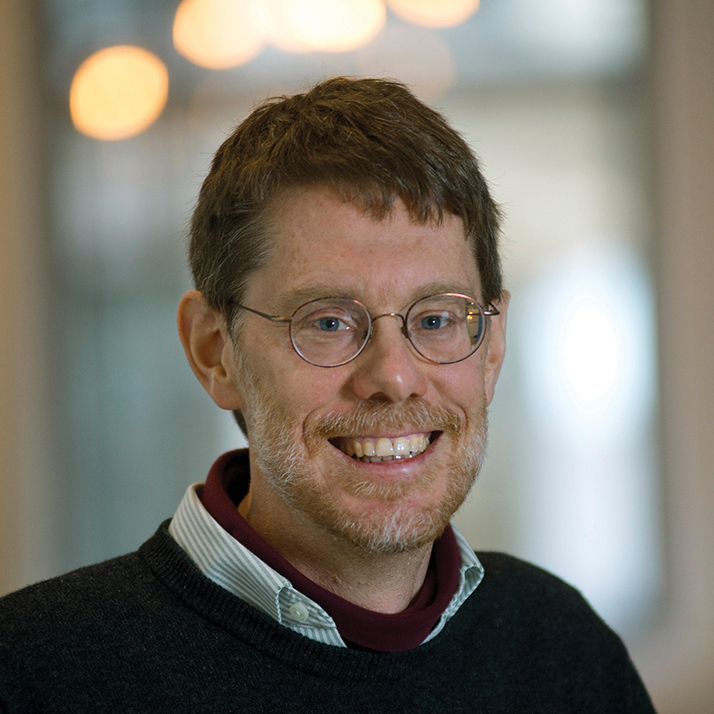 Andrew Millis is co-director of the Center for Computational Quantum Physics at the Flatiron Institute. He formerly served as associate director for physics at the Simons Foundation. Millis is also professor of physics at Columbia University and director of the Simons Collaboration on the Many Electron Problem. In July 2017, he received the Hamburg Prize for Theoretical Physics for his contributions to the field of condensed matter physics.

Millis’ research focuses on understanding how interactions between particles influence the properties of molecules and materials. “The intellectual challenge is to understand the quantum mechanics of interacting many-particle systems,” he says. “You put large numbers of particles together, and they do crazy and interesting things. We want to understand how and why this happens.”

Ultimately, Millis hopes, the center’s research will help materials scientists not only understand the properties of known compounds, but also design new materials and molecules with desired properties. “Thanks to a remarkable combination of new experiments, new theoretical and computational methods, and the unique environment provided by the Flatiron Institute, we have the chance to really make progress on fundamental understanding and control of the quantum properties of materials,” he says. 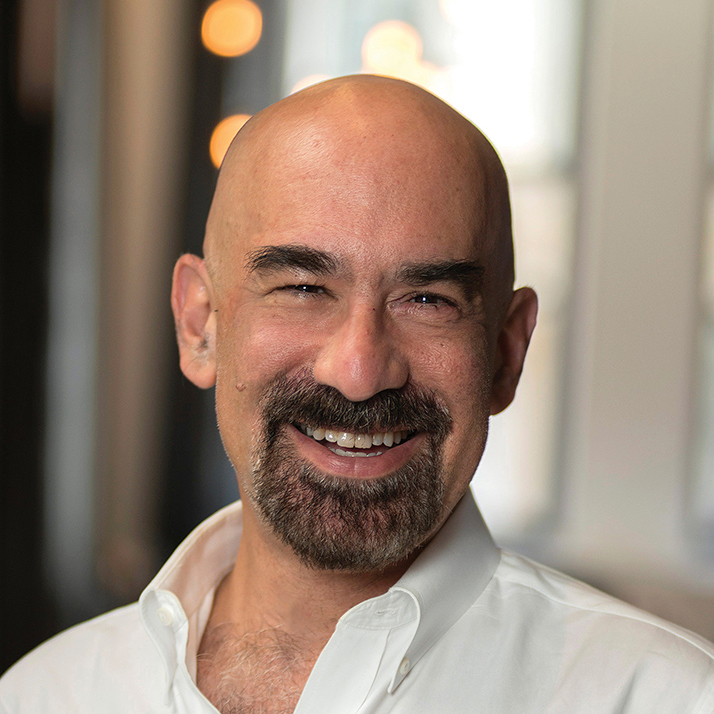 David Spergel directs the Center for Computational Astrophysics at the Flatiron Institute. The center, he says, aims to “address some of the basic questions that we have about the universe: How did it begin? How will it end? How did the Earth, stars and our galaxy form? What makes up the universe?”

Spergel has spent his career tackling some of those cosmological conundrums. Since receiving his Ph.D. from Harvard University, he has focused on probing the nature of dark matter and uncovering new physics. He played an influential role in the Wilkinson Microwave Anisotropy Probe project, which mapped temperature fluctuations in the heat left over from the Big Bang.

In December 2017, Spergel and his colleagues received the 2018 Breakthrough Prize in Fundamental Physics for their work on that project. In addition to his directorship, he is Charles A. Young Professor of Astronomy at Princeton University. 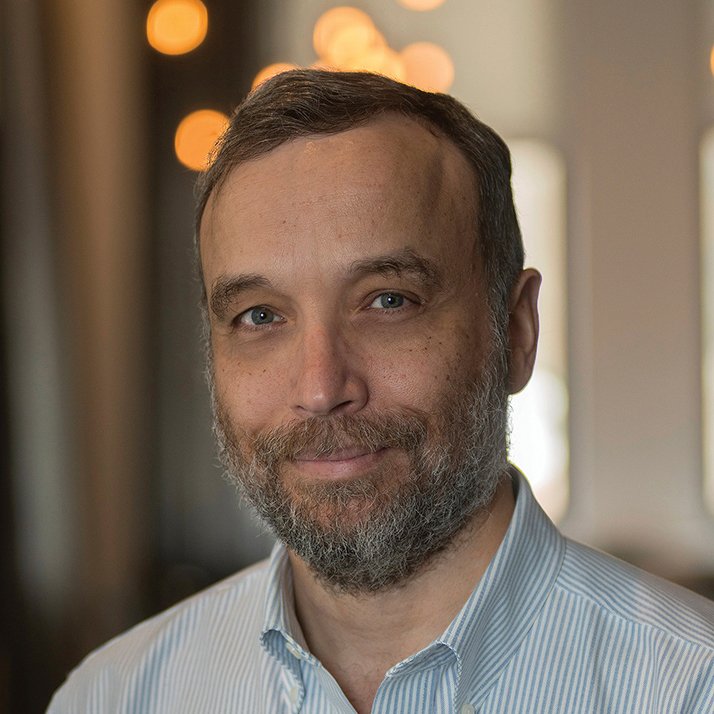 “Ours is a world in which we try to beat out all uncertainty,” Nick Carriero says. Carriero co-directs the Flatiron Institute’s Scientific Computing Core, which develops, deploys and maintains the institute’s computational infrastructure and develops software for the greater scientific community.

Coders, he says, expect the same chunk of code to function the same way even on different hardware. Carriero ensures that the institute’s computers and software perform reliably, drawing from his experience managing high-performance computing platforms as co-director of Yale University’s W.M. Keck Biotechnology Resource Laboratory. “If you run the same thing designed to be deterministic twice and you get different answers, that’s a bad thing,” he says.

Sometimes a bit of uncertainty can help drive discovery, though. “Non-determinism and randomness are cousins of uncertainty,” he says, “and they both play important roles in computing.” Computers can generate random numbers that can help assess an algorithm’s efficiency or broaden a simulation’s scope. “There’s no point running a simulation multiple times if it’s deterministic. But by introducing randomness, your simulation will explore something slightly different each run,” Carriero says. 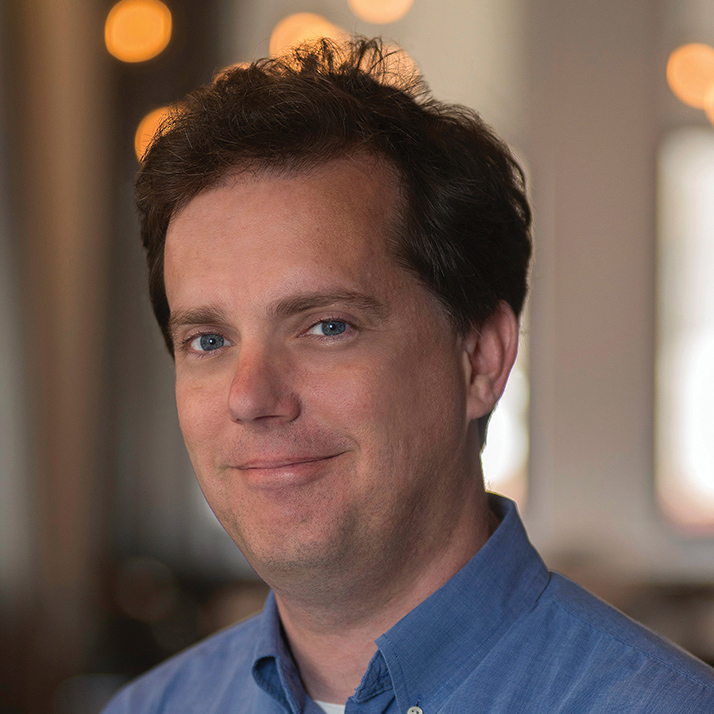 Ian Fisk is co-director of the Flatiron Institute’s Scientific Computing Core, which manages the institute’s computational infrastructure and develops computational software for the scientific community. “We try to make sure that scientific progress is limited by how quickly the people can think and understand, and not by how quickly computers can process and access data,” he says.

Fisk majored in mathematics and physics in college before earning his M.S. and Ph.D. from the University of California, San Diego. He later served in several roles overseeing the preparation of the computational infrastructure for the Compact Muon Solenoid experiment within CERN’s Large Hadron Collider program. He joined the Flatiron Institute in 2014, then called the Simons Center for Data Analysis, because building up the computational infrastructure for a multidisciplinary research institute “sounded like a great challenge,” he says.

The core’s work, he says, involves adapting to the evolving challenges of supporting scientific research. “How people need to work to make progress in their fields is always changing,” Fisk says. “How to plan for capacity and capability is constantly changing.” 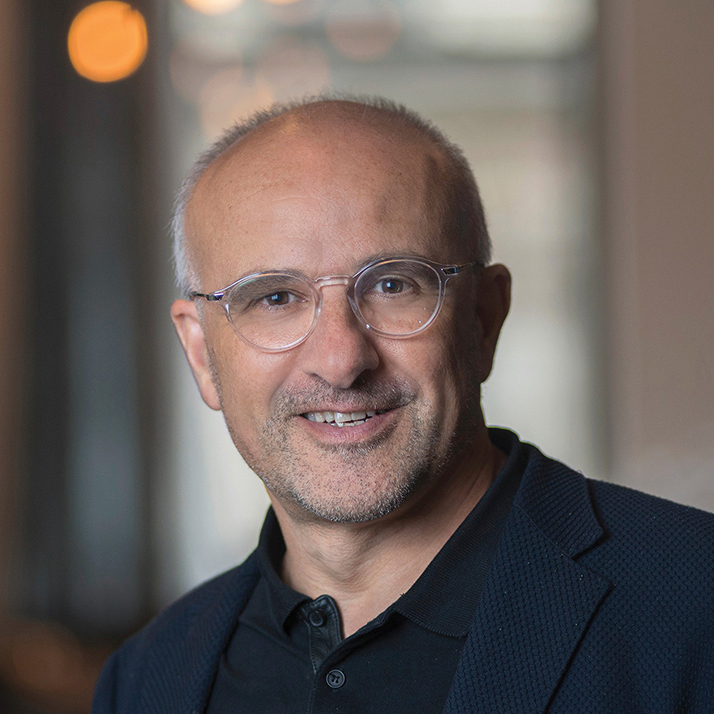 Antoine Georges is director of the Center for Computational Quantum Physics (CCQ) at the Flatiron Institute and a pioneer of dynamical mean-field theory, a method to determine the electronic structures of materials containing electrons that display collective, rather than individual, behavior.

At the CCQ, Georges continues his innovative research into the behaviors of the unfathomable numbers of electrons that govern the properties of molecules and materials. The quantum mechanical behavior of all those electrons is “simple to formulate but extremely hard to solve,” Georges says. Together with co-director Andrew Millis and distinguished research scientist Angel Rubio, he leads the center’s efforts to develop ideas, algorithms and code to help tame the complexities of the quantum world. 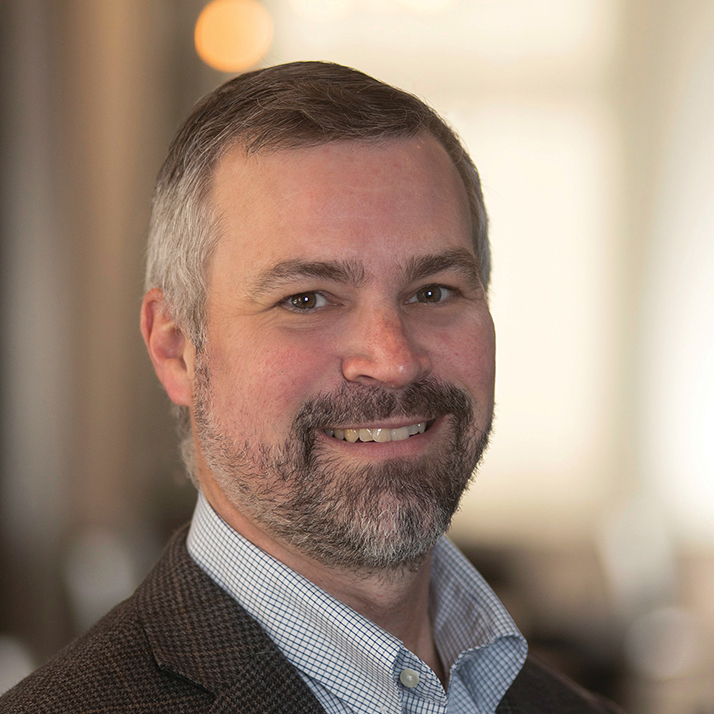 Alex Lash is the Simons Foundation’s chief informatics officer. His team helps manage, analyze and disseminate the foundation’s extensive scientific datasets and develops software tools to advance the foundation’s mission. The work combines his training in anatomic pathology and a lifelong love of computers. He was previously a laboratory member in the computational biology program and then scientific director of the bioinformatics core facility at Memorial Sloan Kettering Cancer Center in New York.

Designing a software tool requires a firm understanding of how people will use the system, Lash says, but developing that understanding can be tricky. “There’s always a bit of uncertainty about what users want, even if you have them right in front of you. They can’t perfectly foresee how they might use the system, and neither can we,” he says.

Lash’s team addresses this challenge by putting themselves in users’ shoes during pre-launch designing and testing, and then by tracking feedback after a launch and fine-tuning the software accordingly. “That’s how you make your users happy,” he says. 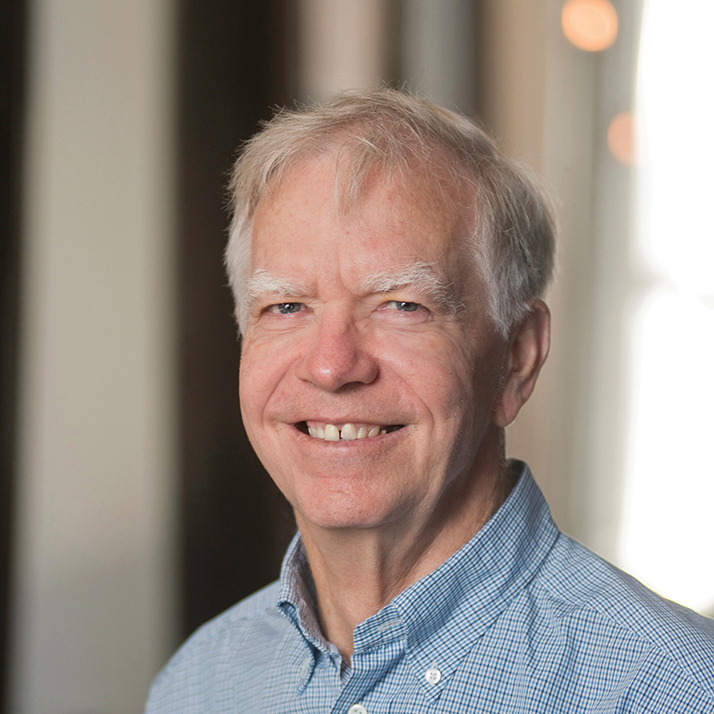 Louis Reichardt is director of the Simons Foundation Autism Research Initiative (SFARI), overseeing the group’s efforts to study the causes of autism and enhance the quality of life of individuals with the condition and their families.

Reichardt initially intended to study history in college but was inspired by the Sputnik satellite, molecular biologist James Watson, and novelist and physical chemist C.P. Snow to change his major to biology. After attending the University of Cambridge as a Fulbright scholar and completing his Ph.D. at Stanford University, he changed his research interest from genetics and molecular biology to neuroscience as a postdoctoral fellow at Harvard University.

At the University of California, San Francisco, his lab identified the protein synaptotagmin 1, later shown by others to be critical for neurotransmitter release. He completed many studies on neurotrophins and their receptors, which are essential for neuronal survival and function. By combining genetic, cellular and biochemical analyses, his group characterized the impact of cell adhesion molecules on autism-related behaviors. In July 2013, he assumed directorship of SFARI. 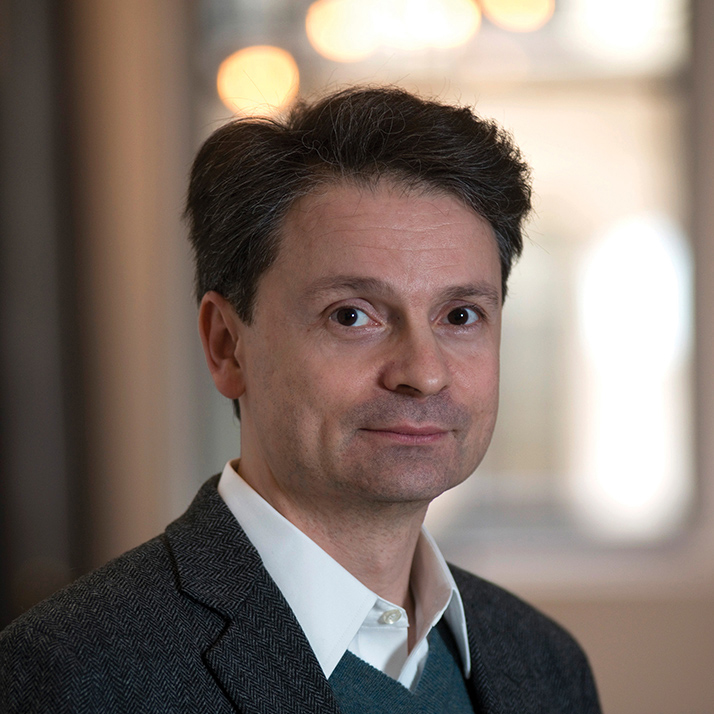 At age 15, Yuri Tschinkel picked up a book about number theory, which sparked his enduring interest in the theory of numbers. That interest led him to earn a Ph.D. from the Massachusetts Institute of Technology and pursue a career as a research mathematician, working at the interface of algebraic and arithmetic geometry. Now, as director of the Simons Foundation’s Mathematics and Physical Sciences (MPS) division, he is dedicated to supporting mathematics, physics and theoretical computer science on a much broader scale.

Conducting mathematical research and overseeing MPS each provide unique challenges, he says. “In number theory, there is no uncertainty,” Tschinkel says. “In decisions on grant applications, there is a lot of uncertainty: Panels sometimes produce divergent opinions; long-term projects may or may not lead to exciting science.”

Tschinkel is excited by the utility that computational tools are bringing to areas of pure mathematics. Such methods allow mathematicians to tackle problems that are larger and more complex than ever before. But even with such technological advances, “sometimes one needs just a brilliant idea” to make a breakthrough, he says.