Every morning, Aditi Sheshadri grabs a cup of coffee and heads to her computer to check on the polar vortex. Sheshadri, a postdoctoral research scientist at Columbia University and a Simons Society Junior Fellow, is trying to figure out what causes the vortex in the Arctic to split, an event that plays a role in triggering blizzards and frigid temperatures in midlatitude areas. I recently spoke with Sheshadri at the Simons Foundation about her work. An edited version of the interview follows.

In the past, meteorologists have pinned extremely cold weather on the polar vortex. What’s the connection?

In the northern hemisphere, the polar vortex is always at its maximum strength in December or January, and it breaks up and disappears sometime between March and May. Sometimes it can be displaced, which means it is pushed to lower latitudes, or it can split in two. Such events impact weather and can contribute to extremes of temperature and precipitation.

How does the polar vortex form?

A polar vortex is a huge, rotating mass of air. One vortex forms around each pole every winter. So we really have two polar vortexes. They form in the stratosphere, the second layer of the Earth’s atmosphere as you go upward, starting at about 10 kilometers. Over the cycle of seasons, air around the poles goes from being extremely cold to extremely hot. In early fall, a difference in temperature — a temperature gradient — begins to form between the equator and the pole. This is caused by radiative processes, like carbon dioxide absorbing heat from the sun, and it leads to the formation of the polar vortex. But the strength of a polar vortex is also influenced by the dynamics of large, planetary-scale waves in the stratosphere.

You mentioned that the polar vortex can split. How does that happen?

Waves that influence the strength of the polar vortex are generated in the troposphere, the lower layer of Earth’s atmosphere. If, for example, winds are moving across the planet’s topography, over mountains or from land to sea, they generate what are called Rossby waves. Gravity waves are generated by processes like convection, and the interaction of weather systems can also generate waves. All of these waves propagate upward, into the stratosphere, where they break, just like water waves break on the beach. It’s the dynamics of these breaking waves that can generate the split. Exactly how, we don’t know.

What are some of your hypotheses about how the split happens?

When the polar vortex splits, the temperature in the polar stratosphere can rise by as much as 50 degrees Celsius over a week. We call this a sudden warming event. There are two kinds of sudden warming events, splits and displacements, both of which are associated with breaking waves. We’re not quite sure how to tell when a split or a displacement will happen. When there is a displacement, there is an increase in the amount of wave-1, a single maximum of low pressure. When there’s a split, we see an increase in wave-2, where there are two low-pressure maximums. We don’t know if waves that are already in the stratosphere are interacting and influencing the formation of wave-1 or wave-2 or if the stratosphere is just responding to waves coming up from the layer below it. That’s what we are trying to figure out.

Why are you so interested in the polar vortex?

What can the polar vortex tell you about past climates on Earth?

Previous studies that have looked at paleoclimates didn’t generally take the stratosphere into account. One of the ideas I had for my postdoctoral work was to try and understand the role of the stratosphere in setting transitions between periods of more ice, and periods of less ice, like right now. These cycles are called glacial-interglacial cycles. When you come out of a glacial cycle, there’s probably a lot of carbon and heat released from the Southern Ocean.

The polar vortex might be expected to be stronger under these conditions. However, wave generation from the troposphere is also expected to change because of the presence of massive ice sheets. The strength of the polar vortex in turn influences surface winds, which impact ocean upwelling, affecting things like how much carbon dioxide is coming out of or going into the ocean. Trying to understand what the polar vortex looked like in paleoclimates may help us understand the shifts between Earth being covered and not being covered in ice sheets.

What about other planets? Do they have polar vortexes?

There are polar vortexes on Mars, just like on Earth. Mars has high topography and large dust storms, which makes the planet’s meteorology interesting. If you look at Saturn, too, there’s actually a hexagonal polar vortex around one of the poles. It’s probably a standing wave, what we call wave-6. I’d love to know what sets up that wave.

Aside from studying the polar vortex, what are you working on?

In the last few months, I’ve become very interested in understanding whether we can relate the atmosphere’s response to increased greenhouse gases, ozone depletion and other external forcing to how the unforced climate fluctuates naturally over time.

Model of the polar vortex splitting (courtesy of Aditi Sheshadri) 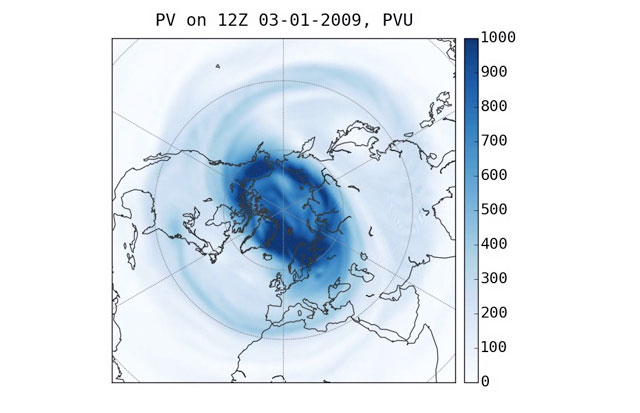 The Arctic polar vortex splits into two low-pressure centers, one moving over Canada and the other over Siberia. The animation, based on data from the ERA-Interim reanalysis performed by the European Centre for Medium-Range Weather Forecasts, tracks the behavior of the vortex for two months starting on January 1, 2009. In the end, a single vortex re-forms, but it is much weaker than the original flow.

The Simons Society of Fellows is a community of scholars that encourages intellectual interactions across disciplines and across research centers in the New York City area.

Tell Us About the Special By Stacey Greenbaum
Global Brain

From the bioRxiv: A Selection of Recently Posted Papers from SCGB Investigators and Others
Mathematics and Physical Sciences

Rachel Rosen on Black Holes and Alternative Theories of Gravity
Advancing Research in Basic Science and MathematicsSubscribe to our newsletters to receive news & updates
We use cookies to analyze web traffic and to improve your browsing experience; full details are in our privacy policy. Please agree to accept cookies from our site.AGREE