Roughly 4 billion years ago, the early Earth was an unfamiliar world. Large-impact craters pitted the planet’s surface, the sun glowed dimly, and the atmosphere was almost entirely devoid of oxygen. Yet from this extreme environment, the oldest known evidence of life appeared: Mound-like structures built by microbial communities, crystals containing isotopic traces of biological activity, and microfossils embedded in ancient rocks all hint at when the first earthlings emerged. But how Earth went from lifeless to lush remains uncertain.

“It’s the biggest question that science has not been able to come to grips with,” says Roger Summons, professor of geobiology at the Massachusetts Institute of Technology. “It’s a grand challenge.”

That challenge has attracted an international group of scientists, each bringing expertise from disparate fields such as molecular biology, exoplanetary science and geochemistry. The Simons Collaboration on the Origins of Life (SCOL), which started in 2013, explores how life can arise and evolve, whether on Earth or elsewhere in the cosmos.

“We’re talking about origins — plural — of life,” says Dimitar Sasselov of Harvard University, who co-directs the collaboration with Jack Szostak of Harvard. “We’re looking for any plausible pathways, not necessarily for the one and only origin of life here on planet Earth.”

The search for life’s origins poses a challenge, as it incorporates aspects of many different fields. The breadth of uncertainties involved, from the composition of the ancient Earth’s atmosphere to the mechanisms that assembled the first biomolecules, places the subject out of reach for any one research group or lab to fully explore, Sasselov says.

The need for a large, collaborative hunt for the origins of life sparked interest during a 2012 Simons Foundation meeting at the Buttermilk Falls Inn in Milton, New York. That gathering assembled experts from many disciplines to discuss potential Simons collaborations. The next year, SCOL began with 12 founding investigators and one honorary investigator. Over the next several years, the collaboration added more members to bolster its collective expertise and pursue new research paths. As of 2017, the group had 24 investigators and 14 postdoctoral fellows. “We started as a bunch of individuals working on the things that interested us, the things we’re capable of doing on our own,” says Summons, a SCOL researcher and member of the collaboration’s steering committee. “But as we got to know each other and talk and meet and cogitate, people came up with ideas that otherwise would have never happened without this collaboration.”

The collaboration is pursuing many potential avenues for the origins of life, and one thread is generating particular interest. In a 2015 paper in Nature Chemistry, SCOL investigator John Sutherland of the MRC Laboratory of Molecular Biology in the United Kingdom and his colleagues demonstrated the creation of precursors to nucleic acids, lipids and amino acids — basic building blocks of all known life-forms — from hydrogen cyanide, hydrogen sulfide and a dash of ultraviolet light.

The necessity of ultraviolet light limits where these reactions could have occurred on early Earth, says Sutherland, who will become a SCOL co-director in May 2018. Sunnier spots, such as streams and pools on land, would better facilitate such reactions than dimly lit locations such as hydrothermal vents in the deep ocean. “And at that point, you need to start talking to the geochemists,” Sutherland says.

“We’re looking for any plausible pathways, not necessarily for the one and only origin of life here on planet Earth.”

In 2017, SCOL invited several earth and planetary scientists to give presentations at collaboration meetings for consideration to become investigators, signaling the collaboration’s appreciation of the necessity of geoscience in work on the origins of life. Insights provided by the collaboration’s chemists and biochemists, such as a potential need for ultraviolet light, can help guide the geoscientists toward environmental clues. For instance, exploring the processes and molecules that would have been available in streams and pools on early Earth could help chemists further hone their experiments. “What I like about this is that the chemists on their own couldn’t do it, the geochemists on their own couldn’t do it,” Sutherland says. “We need to work together.”

Bridging the gap between pristine laboratory experiments and real-world conditions requires making the experiments “dirtier,” says SCOL investigator Dieter Braun, professor of biophysics at the Ludwig Maximilian University of Munich. Inspired by work done by geologists, his group experiments using 3-D-printed rock replicas in the lab. Braun and his colleagues mix powdered minerals such as basalt with printing resin. Using a 3-D printer, they can layer custom shapes of the mixture onto polished rock. The artificial rocks mimic the porous volcanic rocks that were probably abundant on the early Earth. The powdered rocks can catalyze and take part in chemical reactions on the surface, and small pores in the mimic rock can trap water, create air pockets and stash molecules that would otherwise get washed away.

“If we just keep our experiments in glass flasks and clean environments, we will never find these solutions,” Braun says. “I think we have to go into those dirty geological settings, and I think we’ll learn a lot by doing that.”

A diagram of pockets in a 3-D-printed rock replica. The nooks and crevices can hoard water and air pockets, thereby retaining organic molecules such as precursors to DNA that would otherwise wash away.
Image courtesy of Dieter Braun of the Ludwig Maximilian University of Munich

What rocks on ancient Earth looked like remains somewhat uncertain, though. Plate tectonics, weathering, erosion and biological activity have destroyed nearly all relics of early Earth’s surface. Luckily, scientists do know of a treasure trove of remnant rocks — it’s just not on Earth.

Mars, unlike Earth, has undergone relatively little resurfacing. The Curiosity rover discovered that rocks from the planet’s Gale Crater and surrounding landscape date back between 3.6 billion and 4.1 billion years — making them around the same age as the oldest rocks on Earth. “We can look at sedimentary rocks on Mars that are effectively the same age as the very oldest sedimentary rocks on Earth that may contain life,” says SCOL investigator John Grotzinger, who will also become a SCOL co-director in 2018. He is a former project scientist for the Curiosity rover mission and Fletcher Jones Professor of Geology at the California Institute of Technology.

In June 2017, Grotzinger and his colleagues reported in Science that geochemical evidence from Curiosity’s trek through the Gale Crater suggests the region once hosted liquid-water lakes with layering similar to those found on Earth. Sediments near the top of these ancient lakes contain evidence of more abundant oxygen than what was found in those closer to the lake bed. This division offers further indication that such lakes may have been favorable to life.

“If you find a lake on Mars and you compare it to an ocean on Earth, it’s not exactly the same,” Grotzinger says. “It’s certainly not an identical twin, but it’s probably a cousin.” The Martian lakes can offer insights into what similar bodies of water may have looked like on the early Earth, he says. Dissimilarities between the two can shed light on why the two planets ultimately diverged in terms of habitability.

This illustration depicts the lake of liquid water that once filled Mars’ Gale Crater. Evidence collected by the Curiosity rover indicates that streams, deltas and lakes wetted the Red Planet’s surface more than 3 billion years ago, possibly providing a medium ripe for life.
Image courtesy of NASA/JPL-Caltech/ESA/DLR/FU Berlin/MSSS

SCOL’s ongoing research into all aspects of the emergence of life, from chemical bonds to extraterrestrial lakes, makes Sasselov optimistic that the field is closing in on an origin story. “We are terribly close, it seems to me, to having the whole thing finished for one pathway,” he says. “But the jury is still out. It may turn out to completely be a dead end and back to the drawing board, but it doesn’t seem like that to me. So many things have fallen into place.” 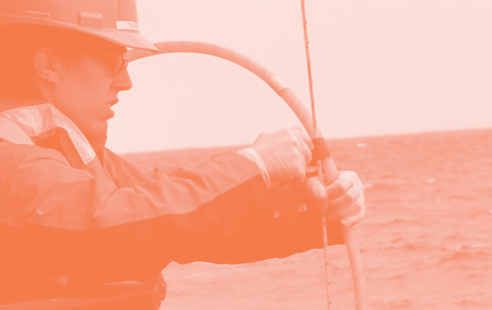 Nurturing The Next Generation Of Marine Microbial Ecologists