To most people, it seems inconceivable that a tricycle with square wheels could roll smoothly and comfortably… But with mathematics, it is possible: all you need is a road with bumps that are tailored to the shape of the wheels.

To most people, a museum that is both fun and devoted to mathematics sounds impossible. But with exhibits like the square-wheeled tricycle, the Museum of Mathematics (MoMath for short) may just change your mind. “We will open the doors for certain with something pretty spectacular,” says Glen Whitney, the director of the new museum. He expects to cut the ribbon in the spring of 2012.

Already the MoMath team has put together a 4,500-foot traveling exhibit in the style of a carnival called the Math Midway. They viewed it as a trial run for the museum, proof that mathematics exhibits could draw crowds. The Math Midway debuted at the World Science Festival in New York in 2009 and has since gone on to tour various museums around the country, with stops in Pennsylvania, Texas, and California.

Because of its participatory approach to mathematics, including the curiously smooth tricycle ride, the Midway was the hit of the festival. “The whole Washington Square Park was full of exhibits, but the real crowds were at the Math Midway,” says mathematician and dancer Karl Schaffer, who performed at the festival. “I’ve had total strangers say to me ‘Are you the Math Midway person?’ says Cindy Lawrence, chief of operations for MoMath and the leader of the project to build the Math Midway. “A lot of people came back in 2010 just for that.”

The Museum of Mathematics has been on a surprisingly fast track to development so far, although it has not yet reached the finish line. The idea came to Whitney in 2008. A few years earlier, he had visited a small mathematics museum called the Goudreau on Long Island. “It was just two rooms in a community center, and it was open only by appointment,” Whitney says. Nevertheless, it made a great impression on him, and he was dismayed to find out in 2008 that the shoestring operation had shut down.

“But then I thought that maybe the closing was a blessing in disguise,” Whitney says. “This sort of thing is more likely to succeed if you set your sights higher.” Because of his background as a Ph.D. mathematician, plus his experience in the world of finance and at the Simons Foundation Autism Research Initiative, he believed that he had the skills to launch a new museum. By October 2008, he had quit his job to work full-time on MoMath.

Whitney found a kindred spirit in George Hart, chief of content for the new museum. Hart is well known in the mathematics world for his whimsical sculptures, which combine many small pieces (such as pencils, blocks, and plastic utensils) to form beautiful polyhedral figures. In recent years he has designed many of his sculptures to have public “barn raisings,” in which ordinary people participate in the final assembly. For a recent piece called Gyrangle, he machine-tooled 490 metal triangles that were then put together (along with almost 6,000 nuts and bolts) by visitors to the USA Science & Engineering Festival in Washington, D.C.

Whitney persuaded Hart to resign his position as research professor in the computer science department at Stony Brook University to work on the museum. It was a hard decision for him, a big gamble with no safety net. But, Hart says, “this was a once-in-a-lifetime opportunity for me to be engaged with fun people who have the same mission.” He says that he has talked to many other people who wanted to start math museums—”probably a dozen groups over the last 20 years”—but that Whitney was the first person he thought could pull it off. “Glen has gotten a lot of resources and people together,” Hart says.

In fact, a $20 million capital campaign is now within $1 million of reaching its goal. Negotiations concerning a location near Madison Square Park are in their final stages. Whitney, Hart, Lawrence, and chief of design Tim Nissen are now going full steam ahead producing exhibits that will fill 19,000 square feet of space spread over two stories.

In January 2009, the MoMath team (then called the Math Factory) got a chance to build a smaller-scale prototype. “The World Science Festival was having trouble getting enough mathematics content,” Whitney says. The festival organizers asked him if he could fill a small space, 1,200 square feet, and suddenly the team had five months to design, take to prototype, test, and build a traveling exhibition. Fueled by their tremendous enthusiasm, they developed and built many more ideas than that space would hold, ending up with an exhibition of 4,500 square feet. The team added the final touches just days before the festival, and it was only then that festival organizers made the final decision to accept most of the exhibition, which filled three booths and covered half a city block.

“If you talk with people in the museum business, they’ll tell you that it’s impossible to develop an exhibit of that size in five months,” Whitney says. Fortunately, the team didn’t know that. They also had good timing. “We hit the economy perfectly, at a time when nothing else was going on in the museum world,” Whitney says. “So we were able to hire Ralph Appelbaum Associates,” the world’s largest museum-design studio.

Even museum pros realized that the Math Midway was something special. Eric Siegel of the New York Hall of Science wrote on his blog, “I hope it will not be too snarky to say that I was very surprised to learn that Ralph Appelbaum’s firm designed the exhibit, as it is a much simpler, leaner, and more playful vocabulary than I have seen in any of their other exhibits. They deserve real credit for responding to the Math Factory’s enthusiasm with their own burst of creativity.”

The team’s status as newbies in the museum world has been both a blessing and a challenge. They have a fresh point of view that obviously energized even an experienced design company. On the other hand, they have had to make do with a very small staff. “We work over 100 hours most weeks, and 60 hours would be a vacation,” Lawrence says. Many are the nights that they are up past midnight tweaking the design of one idea or another.

The Math Midway taught them that children can be hard on the exhibits. The more popular a feature is, the more likely it is to break. For example, one 3-D puzzle contained large foam pieces that had magnets inside to hold them together; unfortunately, the magnets kept wearing through the foam. Another, called the Roller Graphicoaster, has been through “about a gazillion versions,” Whitney says.

Even something as simple as the signboards takes a lot of work. “You have to distill what you want to say into 50 words,” says Whitney. “It’s kind of like coming up with a series of jingle concepts, one after another.”

The team has received valuable advice from executives of other museums. “One of the best things, from a personal point of view, is that it’s a very collaborative industry,” Lawrence says. Every time they visit another museum, they are invited to look around. “There’s nothing like poking around the basement of the American Museum of Natural History and seeing the museum workshop, where things are constructed,” Lawrence says. “There’s always lots of interesting stuff around,” Whitney adds.

MoMath is definitely going to challenge some stereotypes about mathematics and about museums. “Science centers in America just don’t focus on math,” Hart says. “They present it as a tool, secondary to science. There is no museum in North America that presents math as an end in itself.”

But MoMath’s approach to mathematics may surprise some people, even teachers. Take the square-wheeled tricycle, the signature piece of the Mathematics Midway. It’s fun, but is it mathematics?

Certainly there is mathematics behind it. To design a road on which a square-wheeled tricycle will roll smoothly is a challenging calculus problem. The only solution is a corrugated road with bumps shaped like inverted catenaries (a catenary is the curve formed by an idealized chain hanging from two fixed points). Because the road in the Midway is circular, the bumps grow larger as they move farther away from its center. Thus no two wheels of the tricycle wheel are the same size, permitting it to go over the different-sized bumps. A high-school geometry class can learn about proportions by correlating the sizes of the wheels and their distance from the track’s center.

The vast majority of visitors, however, will not know anything about calculus or catenaries. They will not be able to figure out the exact shape of the road or the exact sizes of the tires. Nevertheless, they will learn something about math.

“Squares mean math to people,” says Tim Chartier, of Davidson University, who is on the museum’s council of advisors. “Inherently, you’re going to have to think geometrically. It is just supposed to get you to enjoy thinking mathematically rather than to teach you mathematics. It’s a different cognitive goal.”

Another example is the Roller Graphicoaster exhibit, in which visitors try to design a ramp that will take a ball from one point to another in the shortest time. Again, observers won’t be able to figure out the exact solution (it’s a classic calculus problem), but in the process of their open-ended exploration, they can make some surprising discoveries: A straight ramp isn’t the fastest, and sometimes it’s better to have the ball dip below the target and come back up. They will be thinking mathematically even if they aren’t writing formulas on a piece of paper.

Finally, consider the Ring of Fire, an exhibit composed of a planar sheet of laser light that illuminates slices of various translucent plastic objects. “You can slice a cube so that the slice is a regular hexagon,” Hart says. “Inside a regular tetrahedron, there’s a cross section that looks like a square. People are surprised and stunned to see right angles emerging. It’s an exhibit that allows open-ended exploration with surprises.”

That’s pretty much the definition of how mathematics will be presented at MoMath, and it’s a far cry from the way many people remember mathematics from their school days.

“The playing around with mathematical ideas is incredibly valuable,” says Becky Walzer, a teacher at the Urban Academy in New York, whose students had a chance to play with the exhibits for several weeks while the Math Midway was installed there. “I would hope that exploring different ways of problem solving would be useful for any student’s classes. If it isn’t, I would argue that something is wrong with those classes.” 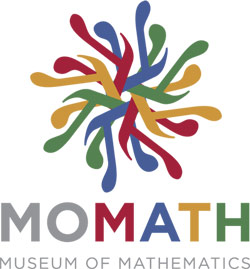 Tags
Plasticity and the Aging Brain

Scabs and Failure: Springboards for a History-Making Vaccine By Robert Bazell
Simons Society of Fellows

Finding Beauty at the Piano and Elegance in Mathematics By Marcus Banks
Advancing Research in Basic Science and Mathematics Subscribe to our newsletters to receive news & updates
We use cookies to analyze web traffic and to improve your browsing experience; full details are in our privacy policy. Please agree to accept cookies from our site.AGREE