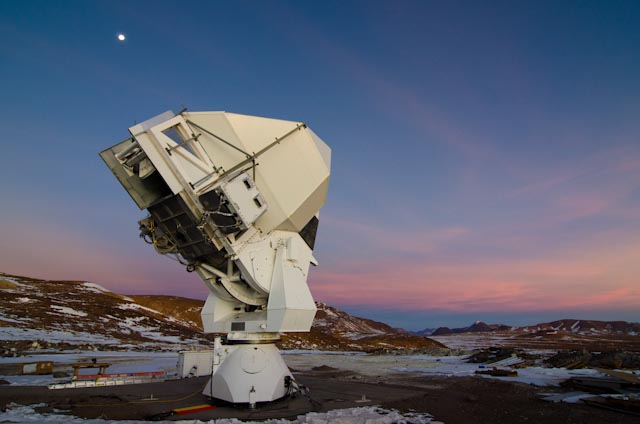 The origin of the universe is one of the greatest scientific mysteries of our time. And proof of inflation — the hypothesized moment following the Big Bang, when the universe expanded exponentially — has become a highly pursued line of study.

Chile’s Atacama Desert is the site for one such project. There, at high elevation, a single Polarization of Background Radiation (POLARBEAR) telescope probes the skies for extremely faint signatures of inflation. And soon that telescope will be joined in its search by two others: the Simons Foundation has awarded co-investigators Brian Keating and Adrian Lee $4.3 million to build two additional telescopes, and implement improvements to the existing device. Together, the three telescopes will be known as the Simons Array.

“What we’re trying to do is essentially detect the Big Bang itself,” says Keating. “To discover the conditions at the exact instant the universe originated.”

“The big question is whether they see something … or don’t,” says Andy Millis, associate director of physics at the Simons Foundation. “A positive result — a detection of these primordial B-modes — would inspire, or re-inspire, this field by providing concrete, observational evidence that these ideas are really relevant.”

The first telescope, the Huan Tran Telescope, has been operating since March 2012, when it began recording potential B-mode data from a largely self-contained site at 17,000 feet above sea level. The site’s high altitude means that the Simons Array will already lie above about half of Earth’s atmosphere. What’s more, the site’s dry climate will allow for improved detection of the extremely faint B-modes.

Construction on the new telescopes is planned to begin in less than a year. “This is an exciting, new approach to one of the fundamental problems of physics and science — the origins of the universe,” says Millis. ”We hope the project can tell us something deep about how the universe actually works.”

Watch: Math and Physics Collide in the Collaboration of Mathematician Tai-Danae Bradley and Physicist Miles Stoudenmire
Plasticity and the Aging Brain

From the bioRxiv: A Selection of Recently Posted Papers from SCPAB Investigators and Others
Global Brain