On April 29, the Simons Foundation brought together theoretical and experimental neuroscientists for a one-day workshop on the analysis of calcium imaging data. The workshop, organized by the Simons Collaboration on the Global Brain (SCGB) and the Simons Center for Data Analysis (SCDA), consisted of 23 participants and 12 speakers, with topics ranging from the scientific applications of calcium imaging to mathematical and computational approaches to processing calcium imaging data. The workshop participants represented a diverse array of brain areas, model organisms and microscopy techniques. 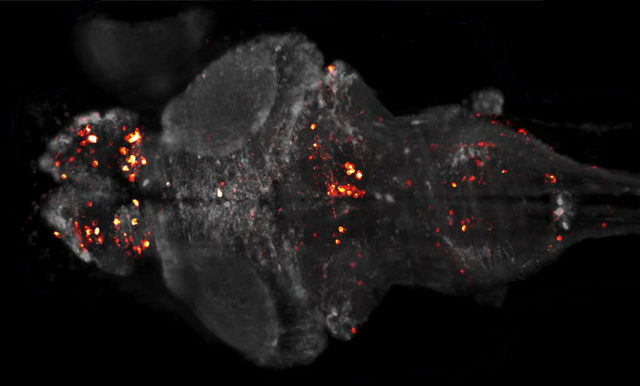 Rafael Yuste, professor of biological sciences and neuroscience at Columbia University and a speaker at the workshop, helped establish the use of calcium imaging in neuroscience nearly three decades ago while working with Larry Katz at Rockefeller University. Everytime a neuron fires a spike, there is an influx of calcium, so levels of calcium inside a neuron can serve as a surrogate measure for the neuron’s firing activity. When a neuron is injected with — or genetically modified to contain — molecules that fluoresce upon calcium binding, a visual readout of calcium levels is possible. This has lead to a revolutionary ability to optically monitor the firing rates of many cells simultaneously, as well as to target specific cell types for monitoring while leaving others untagged.

The data obtained via calcium imaging, however, can be noisy and difficult to interpret. Thus, sophisticated statistical techniques of the nature presented at the workshop are crucial for extracting relevant information from the raw signal. The technical challenges discussed by participants included correction for motion of the tissue, defining the boundaries of individual cells, and inferring precise spike times from the calcium signal. Many of these issues are further complicated by the fact that the calcium signal can vary based on which calcium indicator is used, how much of it enters the cell and what type of cell is being studied.

At the workshop, some speakers, including Eftychios Pnevmatikakis of SCDA and David Greenberg of the Max Planck Institute, presented algorithms designed to tackle these complex issues. Patrick Kaifosh of Columbia University showcased an open-source software package created to implement the algorithms in a standardized and user-friendly way. Additionally, in line with trends in data science, Jeremy Freeman, SCGB Investigator and researcher at the Howard Hughes Medical Institute’s Janelia Research Campus, presented a cluster-based computing and data visualization framework to handle the large volume of data that calcium imaging experiments can produce.

The scientific questions being answered with calcium imaging were also on display at the workshop. Ilana Witten of Princeton University presented her work on understanding how the distributed components of the reward circuit interact. Simon Peron of the Janelia Research Campus showed how calcium imaging can be used to probe connections of cells in the somatosensory cortex. Findings from three-dimensional, whole-brain imaging of the larval zebrafish were also shown, by Alipasha Vaziri of the University of Vienna and Misha Ahrens of Janelia.

While the workshop spanned a range of complex mathematical approaches and scientific problems, ultimately the goal was simple: to get everyone on the same page. As the number of labs using calcium imaging grows, more people are engineering and implementing their own solutions. According to David Tank, director of SCGB and co-organizer of the workshop, “We don’t want people reinventing the wheel.” Therefore, the first priority was just to understand what techniques researchers are already using, and then get a sense of the problems that remain. This knowledge will hopefully lead to an understanding of what the best next steps are.

Quarks, Wormholes and a New Understanding of the Physical World By Marcus Banks
Advancing Research in Basic Science and Mathematics Subscribe to our newsletters to receive news & updates
We use cookies to analyze web traffic and to improve your browsing experience; full details are in our privacy policy. Please agree to accept cookies from our site.AGREE